We are the strength and we are the hope! – CIDSE
Skip to content 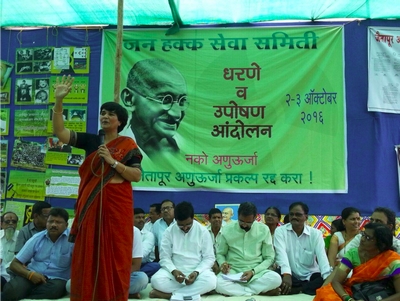 A blog by Dr. Vaishali Patil, anti-nuclear activist (Jaitapur, India) and member of the National Alliance of Anti-Nuclear Movements, on women’s resistance to nuclear power.

“If the government is serious about our rehabilitation as fisherfolks, then another Arabian Sea should be created for us. This is the only compensation we can think of as women,” said Noorjaha Tamake from Nate village in Jaitapur, India. She was expressing her anger, as well as trying to articulate her demands, as a person affected by plans to build the biggest nuclear station in the world, even larger than Japan’s Kashiwazi-Kariwa Plant, by the Nuclear Power Corporation of India Ltd. (NPCIL).

In September 2005, NPCIL made public plans to establish six nuclear reactors with a total capacity of 9,900 MW in Jaitapur, which is situated on the Arabian Sea in the Konkan region of Maharashtra State. The reactors were to be designed and built by Areva, a largely state-owned French nuclear energy company, and Electricité de France (EDF) became involved as well.

To be spread over more than 968 hectares of land, the project has led to the expropriation of five villages with a total population of 4,000 people. Right from the beginning, the people of Jaitapur put up brave resistance to this nuclear power project, with initial opposition coming mainly from farmers whose land was under threat of acquisition. In India, there is a land acquisition act which gives power to the state to acquire anybody’s land, as the state maintains overall dominion.

In addition, fisherfolks from the villages of Sakhri Nate, Tulsundi, Ambolgad, Sagve, Kathodi, Jambhli and Nanu-Ingalvadi, with an approximate population of 50,000, are also under threat by this proposed nuclear power project. Unfortunately, NPCIL has not considered these fishfolks as project-affected people, even if the annual fish catch in Ratnagiri District is 12,500 tonnes, and out of that, 4,000 tonnes comes from Sakhri Nate village. There are around 200 big trawlers and more than 300 small fishing boats. Nearly 6,000 people from Sakhri Nate are directly dependent on fishing, and more than 10,000, including women, depend on related activities.

The Muslim fisherfolk women of Sakhri Nate go around to surrounding villages selling fish door-to-door. They also market and process dry fish. These activities provide a major source of income for their families. As such, they have become the backbone of the Jaitapur anti-nuclear movement.

In 2009, there was a public hearing conducted by the district administration to get environmental clearance for the project. A highly technical environmental impact assessment report of 1,200 pages was distributed in English to the women of Sakhri Nate, many of whom are illiterate or do not read English. Although there is a provision that such a report should be made available in the local language, this was denied and the women had to fight for it. The women became agitated when they learned that 52,000 million litres of hot water would be released into the Arabian Sea by the nuclear power plant project. They understood that this rise in temperature of the sea would take away their livelihoods. This information alone was enough for the women to get organized and mobilize against this nuclear power project. Traditional Muslim community norms do not allow women to leave their villages so the women forced the men to go and visit Tarapur, the site of the first nuclear power project in India. On their return, the women kept listening to the information their husbands shared in the family.

This visit to the Tarapur nuclear power project, which was started 42 years back, was a great learning lesson for local leaders. It inspired them to take action when French President Nicolas Sarkozy came to India in December 2010 to make an agreement. The women stood at the forefront holding banners that said: “Sarkozy Go Back”.

Grassroots wisdom, especially that of women, on the impacts to livelihoods and democratic rights, has been remarkable. When the mass movement was at its peak, women along with their children would shout, “Nako Anu-Urja (No to Nuclear-Energy)”, to every passing vehicle. The movement has faced difficult setbacks, such as the police shooting of young activist Tabrej Sayekar, activists getting trapped in various court cases, and farmers nearly being forced to accept a land compensation deal, which created divisions within the anti-nuclear movement. Despite these obstacles and the fact that they did not actually receive any compensation as fisherfolks, the women have remained committed to the anti-nuclear movement. They know all too well what will be their future if this project is completed.

As an activist who has been supporting the organisation and mobilisation of communities against this disastrous project, what has been amazing for me to witness is how in the last 10 years the women have come to understand what nuclear power is, how radiation impacts the human body and the potential negative impacts to their livelihoods. Once the women understood this, even more so following the Fukushima nuclear accident in March 2011, they were ready to die for their cause. Right after Fukushima, the women and men of Nate Village did not go fishing for almost one week. Various television networks were airing images and telling the stories of victims of this disaster. It was at that moment that the women felt that supporting and leading the anti-nuclear movement would be the only way to survive.

Within the last 10-12 years, there have been more than 25 protests, many activists have been jailed, forged criminal cases have been registered by the police and state repression has increased. The District Magistrate passed an order against me and our senior leader ex-justice Kolse Patil, prohibiting us to enter the Jaitapur area because it had become very challenging for the police to control the participation of women and children in protests. Even during this time of repression, however, the women never gave up. All mothers encouraged their children, from ages 6 to 18, to participate in school strikes. The reason was that the government had made it compulsory for school management to teach propaganda through screenings of documentaries, distributing pamphlets, and organizing talks in which it was repeatedly said: “nuclear is green and clean.”

Since this struggle has been ongoing on for more than 10 years, sometimes the men feel hopeless about where the government stands, and even more so now with the conservatism of the current government. Prime Minister Modi has been entering into nuclear deals with various countries, which is discouraging. But women have an inborn quality of being persistent and visionary, and their determined self-sacrifice has kept this movement alive. Precisely because of this, on October 2nd, 2016, the birth anniversary of Mahatma Gandhi, more than 1,000 women participated in a powerful non-violent fasting protest. This act itself has given powerful strength and hope to this anti-nuclear movement.

There is definitely a long way to go but women have started breaking the patriarchal structures within religion and family that have kept them suppressed for so many years. Finally, women are not only the strength of the movement, but also the hope the movement… 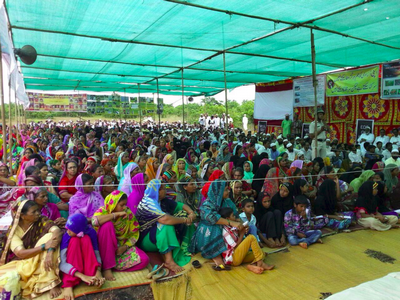