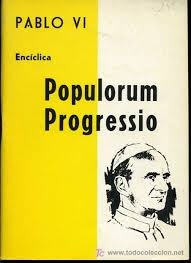 It was 50 years ago, on March 26th 1967, that Pope Paul VI released his encyclical Populorum Progressio: On the Development of Peoples.

This seminal text made the preferential option for the poor a central concern for the Church and profoundly shaped the work of CIDSE and its member organisations as they set about putting into action global solidarity.

It denounced the social inequalities that deny people their dignity and lay the foundation for the vision that each person has the right to integral human development, in others words, equal access to the resources for social, economic, political, cultural, personal and spiritual development. 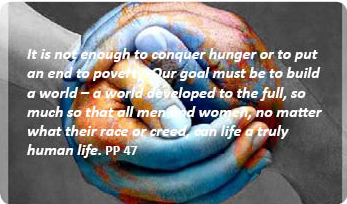 In the 50 years since its publication, the influence of Populorum Progressio has been felt throughout the world whether through the works of Catholic international development agencies, liberation theology, justice and peace commissions and subsequent encyclicals.

On the occasion of the 40th anniversary of Populorum Progressio, CIDSE organised a large conference to reflect on the impact of the encyclical and future actions. Keynote speaker Sr. Ethna Regan made the following observations, many of which remain relevant today:

“I realise that many of you have been reflecting throughout this anniversary year on the context, content and impact of what is sometimes described as our ‘Magna Carta’ of development documents, Populorum Progressio. Not wanting to repeat what you already know, I just want to wonder how Pope Paul VI might respond if he were here at this conference. I think Paul would be happy to see Populorum Progressio engaged with in such a dynamic way at this conference, but also saddened at the continuing relevance of the following insights:

While he would lament the enduring relevance of these words of Populorum Progressio, I think Paul VI would celebrate the enduring relevance of his notion of ‘integral human development’ and would rejoice in the way that concept has been expanded. He would be happy that his words about seeking, knowing and having more in order to be more were inspiring the actions of educators and radio broadcasters, of indigenous peoples and Catholic He would be surprised to see ‘gender’ emerge as a recurring motif in the definition of poverty and in the suggestions for its essential consideration in the projects that constitute the work of Catholic social justice work worldwide.

Catholic aid and development agencies that work for justice and peace, that witness to a special concern for the poor and vulnerable, are uniquely poised to heal some of that bruised trust. However it is important that the critique of the gap that exists between the proclaimed and operative ethic of the wider Church be accompanied by an examination of that gap as it potentially and actually exists in our work as Catholic aid and development agencies. A celebration of Populorum Progressio also needs to be marked by an honest assessment of what we do and how we do it, of the gap between our proclaimed ethic as members and partners of CIDSE and our operative ethic. Such an assessment raises consciousness and such consciousness is the first step to bridging that gap between the ethic proclaimed by our organisations and our actual practice.

We celebrate the enduring relevance of the vision of integral human development found in Populorum Progressio and lament the poverty and injustice that persists forty years later. May this celebration and lamentation sustain us as we work together for global justice.”

You can download the full speech below (EN, ES, FR).

In 2009, Pope Benedict produced his encyclical Caritas in Veritate, which further expanded on the notion of integral human development. CIDSE member, Center of Concern in the US reflected on the links between the two:

“Pope Benedict’s encyclical, Caritas in Veritate (Love in Truth) is an anniversary document marking the 40th anniversary of Populorum Progressio issued by Pope Paul VI in 1967. Benedict notes, ‘In a special way, it is linked to what Paul VI wrote now more than 40 years ago in Populorum Progressio, the cornerstone of the Church’s social teaching, in which the great Pontiff outlined certain decisive and ever relevant ideas for the integral development of humanity and of the modern world’”.

Sr. Katherine Feely, S.N.D. of Center of Concern created a pyramid that outlines the levels of the process of integral human development, where we move from releasing ourselves from the constant preoccupation of securing material needs towards genuine unity in the charity of Christ who calls us all to share in the life of the living God.

Already, in Populorum Progressio, Pope Paul VI recognised the limited resources of the Earth and that the systems and structures of society should work so that all can have access:

“Now if the earth truly was created to provide man with the necessities of life and the tools for his own progress, it follows that every man has the right to glean what he needs from the earth. The recent Council reiterated this truth: “God intended the earth and everything in it for the use of all human beings and peoples. Thus, under the leadership of justice and in the company of charity, created goods should flow fairly to all.”

“All other rights, whatever they may be, including the rights of property and free trade, are to be subordinated to this principle. They should in no way hinder it; in fact, they should actively facilitate its implementation. Redirecting these rights back to their original purpose must be regarded as an important and urgent social duty.” PP 22

Pope Francis has taken us even further with his encyclical Laudato Si’, as remarks Bernd Nilles, Secretary General of CIDSE:

“Populorum Progressio helped and guided us in embracing the importance of people-led development and the need to secure an economy that serves mankind and not just the few. It has been followed by further encyclicals deepening the social teaching and strengthening the commitment for social justice of the Catholic Church. The latest encyclical in this tradition is Laudato Si’, which calls on us to care for our common home from a social and environmental perspective. Pope Francis reminds us that the cry of the poor and the Earth are one cry. That injustice and environmental degradation go hand in hand and have similar causes. In this tradition CIDSE aims at addressing the root causes of global crises and putting forward transformative policies and responses for a just and sustainable world”.

CIDSE is participating in Vatican celebrations of this landmark encyclical through its Italian member FOCSIV. Spanish member Manos Unidas and Slovakian member Erko will be in attendance as well.

As we trace its 50 year history, we can now see the radical transformation that Populorum Progressio still asks of us today and to aim for. The Bishops Conference of Belgium in collaboration with CIDSE members Broederlijck Delen and Entraide et Fraternité, have released a statement to mark the 50th anniversary of Populorum Progressio, where they summarise quite clearly what this transformation means in our world today:

“… Yes, we must believe in the power of change when we commit to this path with many others. We also want to engage with the institutions ‘in transition’ that have set upon that path, in other words that have started a transition towards a world that is more respectful of ecology and of the natural balance. We commit to an ethic of ‘enough’, in other words a lifestyle steeped in simplicity.”

See also, the prayer written for the celebration of the 50th anniversary of Populorum Progressio published by Center of Concern, CIDSE member in the US.