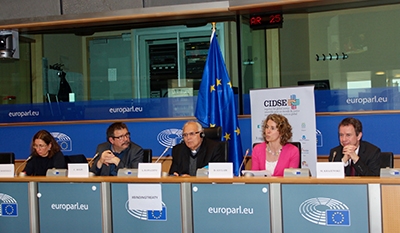 The panel was hosted by MEP Claude Rolin (EPP), Vice Chair of the Committee on Employment and Social Affairs, who opened the debate by acknowledging that his perspective differs somewhat from other members in his party due to his background in labour movements, but feels a responsibility to pursue the debate around integrating human rights into trade agreements, particularly after negotiations of the EU-Canada Comprehensive Economic and Trade Agreement (CETA) did not take respect of human rights or due diligence into account.

“These negotiations launched a debate on including human and labor rights in trade agreements. It offers a window of possibilities to ensure that we redress the imbalanced power relations, and to make sure a good living for all citizens. Voluntary and mandatory measures can add to each other. But we need to recognize the historic momentum of the UN treaty and the need for the EU to take a proactive role in the negotiations. The economy makes sense only if it brings more value to the human being; the economy must be at the service of human beings, not the contrary!”

The current context for the international legally binding instrument on transnational corporations and other business enterprises with respect to human rights (the UN binding treaty on Businesses and Human Rights) was provided by Denise Auclair, Senior Policy Advisor at CIDSE, who also moderated the event. She highlighted the recent approval of legislation in France to enforce due diligence of transnational companies operating overseas as a positive step in the right direction, and noted the years of effort by civil society, Church and other actors in advancing the UN Treaty, which will begin to be negotiated in October 2017 in Geneva.

Keynote speaker Mgr Álvaro Ramazzini, Bishop of Huehuetenango in Guatemala, is known worldwide for his repeated commitment against social injustice, especially in defending the rights of Mayan Indigenous peoples in their fight against transnational corporations that are jeopardizing land and agricultural resources. He has even received death threats for the positions he has taken. He shared his experiences from the ground and welcomed the European Parliament’s urgent resolution on Guatemala human rights defenders which echoes the Church’s claim for all to live a “dignified life”.

“Business activities should benefit poor people and improve lives. This is a Constitutional principle: States, such as Guatemala, must be organized to protect and fulfil the common good and human dignity. In certain cases, we have good laws, but these are not followed. This is the case with ILO Convention 169 on Indigenous peoples’ right to free, prior and informed consent. In other cases, laws are unjust, like the mining code [in Guatemala] which allows the use of cyanide and only asks for 1% royalties, but we have difficulty changing these as our Congress is not working for interests of all. And concerning the Association Agreement between the EU and Central America, we saw that the trade prevailed over other parts such as cooperation and dialogue. We need to change the order. A UN legally binding treaty on Business & Human Rights can and must address these issues. This treaty should improve the wellbeing of all citizens in Guatemala, and particularly Indigenous peoples”.

Another important point for Mgr Ramazzini is the disruption that these companies bring to traditional ways of life that respect life and nature.

“The presence of companies has resulted in the division of many communities, between those who are in favour of projects due to their private interests and those who stand against them”. He said that the harmonious co-existence of communities was disappearing, citing specific cases involving mining and hydro-power companies from Canada and Italy operating in Guatemala.

He added that the Church had a role to play in being in solidarity with the poor and marginalized communities impacted by these companies and to persuade political leaders to follow the moral imperative of putting life before profit and supporting the treaty. “The role of the Church is highly important because it can give voice to those who do not have a voice. It has access to people and institutions that people at the grassroots don’t”. 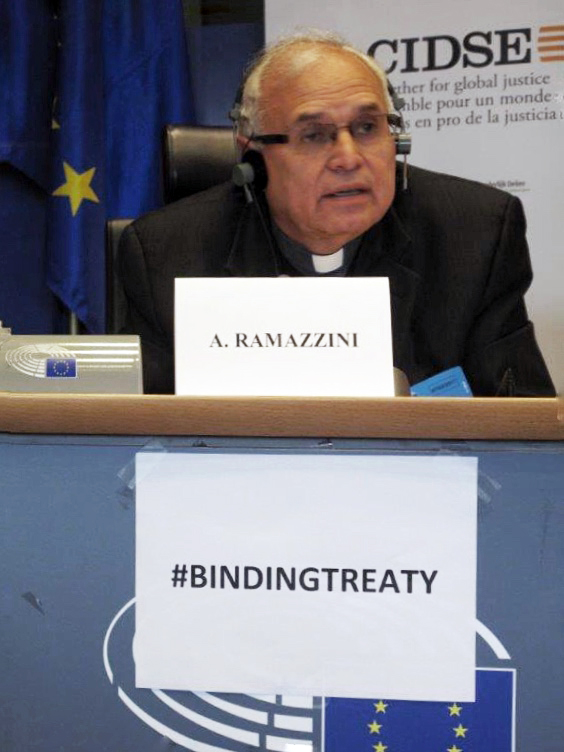 “The activity of TNCs contrasts with the poverty experienced in the territories where they operate. National and transnational corporations generate wealth, but Guatemalans remain poor. How is this possible?” – Mgr Ramazzini

Dr. Markus Krajewski, Chair of Public Law and International Law at the University of Erlangen-Nürnberg, who authored for CIDSE the just-released research study Ensuring the Primacy of Human Rights in Trade and Investment Policies Model clauses for a UN Treaty on transnational corporations, other businesses and human rights, said that one of the main findings from his study is that business interests trump human rights at the grassroots level. He acknowledged that many conflicts leading to human rights abuses are due to unbalanced power relations.

“The requirements of trade and investment agreements limit policy space of governments to change laws and strengthen legal protection. As it is difficult to change or withdraw from international treaties, we need to rebalance human needs and the needs of businesses, addressing rights and obligations of foreign businesses together with principles of fairness and justice in court systems that consider all these elements in a given situation”, he said, citing examples where States were legally pursued by multinationals for “infringing” on their rights to operate and make profit when states tried to create more regulated environments. He called this the “chilling effect,” and said the consequence was that states were dissuaded from reforming their mining codes or putting in place laws that could limit environmental and social impacts, hence the need for a binding treaty.

“This can’t be done only through implementation of existing non-binding instruments like the UN Guiding Principles: a non-legal obligation by definition does not exist. The weaknesses of [OECD] National Contact Points and of domestic laws are at the heart of the issue. Issues like that of parent-subsidiary responsibility show that problems are legal: we need to establish new rules to oblige states to regulate impacts of business activities. Alongside political and moral claims, we can make the legal argument that the EU is obliged by the Treaty of Lisbon to secure human rights and fundamental values in its trade policies, and so should take up an active role in the negotiations on the UN binding treaty”, he said, adding that ideally, regional human rights courts, such as the Inter-American Human Rights Court, could be strengthened to fill this mandate rather than create new institutions.

Claire Courteille, Director of the ILO Office in Brussels, said that the ILO was very preoccupied by violence against trade unionists in Guatemala, and noted the resistance of employers to regulations on supply chains, where abuses often take place.

“We need to strengthen capacities to make sure states and companies comply with their obligations, to ensure redistribution of wealth in countries such as Guatemala. For that we need to ensure coherence and cooperation of different initiatives such as the OECD National Contact Points and the UN Guiding Principles on Business & Human Rights. If we construct a Treaty, we should do it on existing experiences and how we can respond to those. As multinational companies work with subcontractors in global supply chains, legal frameworks are complex. Work on making human rights due diligence a requirement, as France has done, is important”, she said.

Mr. Rolin concluded the session by underlining the growing awareness of EU parliamentarians on the need to link trade and human rights more directly, as seen with the EU resolution on conflict minerals, and throughto their constituents, who have an increasingly important role as consumers in influencing corporate behavior.

We invite you to download the key messages from the event below.