Amplifying the Voices of Women who Defend Community and the Land: KAIROS’ Video Series on the Gendered Impacts of Resource Extraction – CIDSE
Skip to content 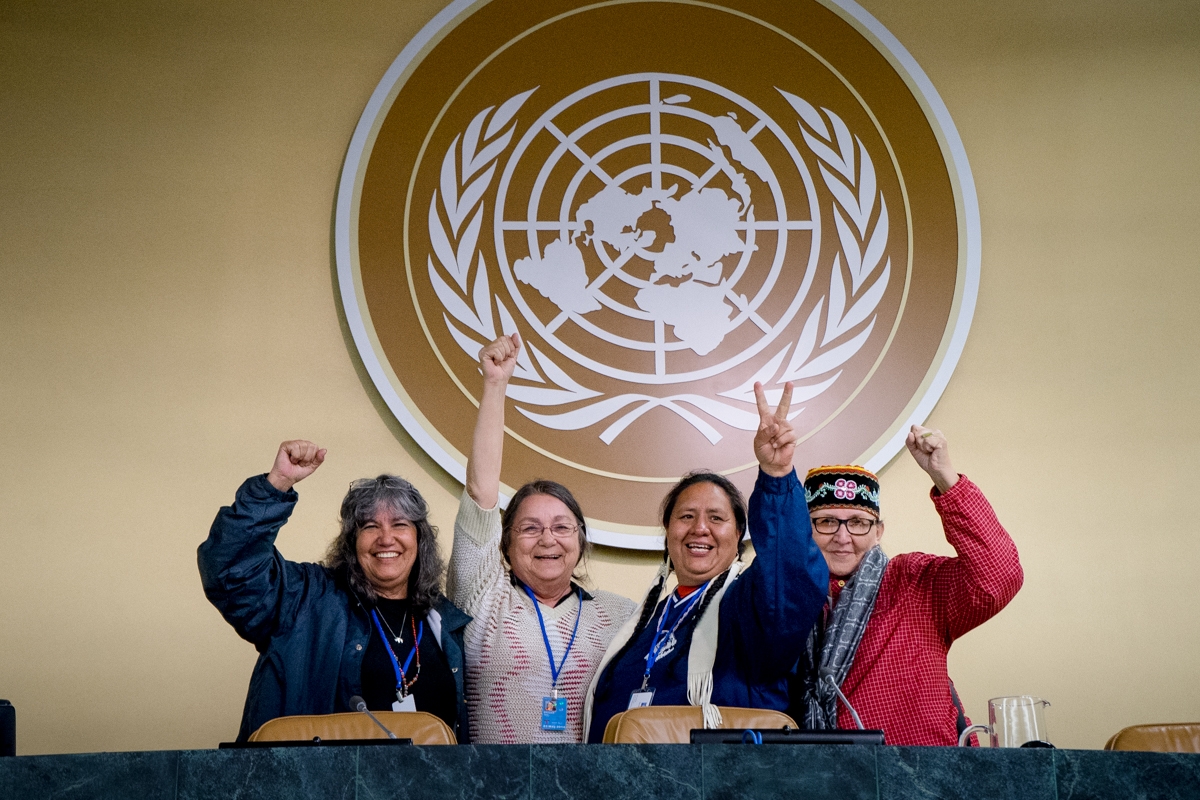 Indigenous women are disproportionately affected by the impacts of resource extraction. This month’s blog gives voice to their experiences and highlights their critical role in defending their land and communities.

“So we, as Indigenous peoples of the world, hold the key to the continuation of life on this planet. With that, I just feel empowered, I feel that when women join our hands together for our beloved Mother the Earth, that she will be our greatest ally”. – Alma Brooks addressing the UN Permanent Forum on Indigenous Issues (UNPFII) in 2014.

Alma Brooks is a Maliseet elder and a partner of KAIROS: Canadian Ecumenical Justice Initiatives (CIDSE’s Canadian member Development and Peace is part of KAIROS). She was part of a delegation of Indigenous women to the UN Permanent Forum on Indigenous Issues (UNPFII) organized by KAIROS three years ago.

Since then, I have learned so much from the Indigenous women and partners I have had the privilege of working with on these issues.

Indigenous women have told us that the arrival of mining projects often means more violence against them, and persecution and criminalisation if they try to protect themselves, their communities and the environment. We have heard this from First Nations women in Quebec, Inuit women around Baker Lake in Nunavut, Mayan women in Guatemala, and Indigenous women in British Colombia.

Because of their efforts, we are beginning to understand that the social, health and environmental impacts of mining on women are unique and different. Women are usually the first to suffer from contaminated water or water shortages, but more often than not they’re the last to enjoy benefits such as employment and increased income, if they ever do. In fact, mines usually mean an increase in the income gap between men and women.

We hear from Indigenous partners in Guatemala that women are sexually harassed, raped and sometimes chased out of their communities if they raise concerns about the impacts of mining. And, added to this, they are stigmatized by society if they become active in movements in defense of water, forests and community rights because prevailing gender roles and stereotypes dictate that women are supposed to stay home.

At the same time, Indigenous women play at critical role in protecting the rights of their communities and the environment against considerable odds and sometimes at tremendous risk, even to their lives. These women are human rights and environmental defenders, community leaders, advocates and academics. They monitor impacts, conduct research, and bring these issues to the table.

Although the perspective of Indigenous women are fundamental to understanding and addressing the impacts of resource extraction, their voices are often marginalized. KAIROS is called to amplify these voices and visibilize this role.
In response to this call, KAIROS released a series of video vignettes featuring the voices of Indigenous women and partners in Canada, Latin America and the Philippines. Titled Gendered Impact of Resource Extraction, this series offers an opportunity to hear directly from women at the forefront of this issue. These videos are in English and French and posted on www.kairoscanada.org.

The video series begins with an Introduction to Gendered Impacts. In Land is Identity Indigenous women explain the deep connection between women and the land.

In Violence Against the Land, Indigenous women speak about the violence and dislocation they feel when their land is degraded and they’re displaced as a result of mining.

The way mining often exacerbates economic and social vulnerabilities and disparities is addressed in Economic & Social Impacts of Resource Extraction.

Finally, in A New Economy, Indigenous women speak on the environmental impacts of an extractivist -based model of development and proposals for a transition to a more sustainable and just economy).

We invite you to watch these videos, discuss them and share them as we work to amplify and respond to the voices of Indigenous women on the gendered impacts of resource extraction.

We need to do this not just for Indigenous women, or for women in general, but for all of us and for just and sustainable relations between all peoples, genders and the earth.

About the author:
Rachel Warden is Latin American Partnerships and Gender Justice program coordinator at KAIROS.