Israel/Palestine: The March of Return – CIDSE
Skip to content 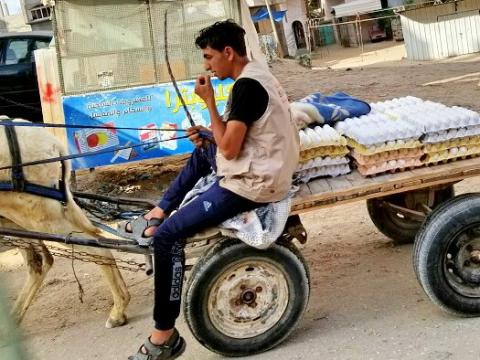 Gerry Lee, Director of the Maryknoll Office for Global Concerns, joined a delegation of representatives of Catholic advocacy organizations to Israel and the occupied Palestinian territory in April.

This article was originally published on Maryknoll’s website here. Maryknoll is one of CIDSE’s members in the USA.

Every Friday since March 30 thousands of Palestinians have gathered in nonviolent demonstrations in Gaza near the fence with Israel to protest the humanitarian crisis caused by Israel’s decade-long blockade and prior strikes on Gaza. Called “The March of Return,” the protest highlights the plight of the 70 percent of Gaza’s people who are refugees, and their right to return to their villages from which they were expelled decades ago.

According to a July 2017 report from the United Nations, Gaza’s unemployment rate is 41 percent, 96 percent of the water is unpotable and each day Gazans only have around three hours of power. The 2017 report concluded that the prediction made by the UN in a similar report in 2012 that Gaza is on track to become ‘unlivable’ by 2020 not only holds but that the deterioration of living conditions for Gaza’s two million residents has accelerated. “Life for the average Palestinian in Gaza is getting more and more wretched,” the report said.

In camps erected near the border fence, many of the protestors have named their tents for the villages their families left behind. In these tents families can meet others from their village, some for the first time, to share a meal and sing traditional songs. Neighbors and local charities bring food to be shared; children play on a playground; women in traditional dress dance outside the tents and street theatre groups perform.

There’s a festive, celebratory feeling in the camps, in contrast to the confrontation occurring a quarter of a mile away at the border fence with Israel. While initially the demonstrations at the fence were nonviolent, since the first Friday demonstration when 16 people were killed and hundreds wounded by Israeli Defense Forces snipers, the protesters have grown more desperate. Youth shout “We want to return” at Israeli soldiers as they throw rocks across the fence and the soldiers respond with tear gas and sometimes live fire. At points the youth have tried to pull down the fence and have sent kites with Molotov cocktails across the border.

In the first month of the demonstrations, 46 Palestinians have been killed, including several children, and hundreds have been severely wounded by live fire from the Israeli army. With other U.S. churches and advocacy offices, the Maryknoll Office for Global Concerns has denounced this use of lethal force against unarmed protesters who present no threat to heavily armed soldiers.

A delegation of 11 representatives from Catholic organizations in Belgium, Wales, the UK, Ireland, France, Germany, Slovakia, and the U.S. spent 24 hours in Gaza, where they visited Catholic Relief Services projects and met with personnel of the UN Refugee Agency (UNRWA) and local human rights groups, as well as city residents. Sponsored by CIDSE, an umbrella organization for Catholic social justice agencies from Europe and North America based in Brussels, the group heard directly from a Catholic parish priest, workers, and youth about the desperation that drives the protests.

Unemployment among youth is a staggering 64 percent, according to the Al Mezan Center for Human Rights, which is based in the Jabalia Palestinian refugee camp in Gaza. Even college graduates often can’t find work. With no job, unable to leave Gaza, and no viable future, one student told the delegation: “We don’t have anything to live for. Who wants to stay here? No one. You must accept humiliation and be silent.”

With very few hours of electricity each day and virtually no potable water, over 40 percent of Gaza’s residents are food insecure and 85 percent depend on the UN or international donations for help. This is an economy in collapse. We spoke to fishermen who couldn’t make a living because Israel has restricted their boats to under 3 nautical miles from shore and farmers who can’t market their produce in Israel.

The blockade of Gaza affects all of life here – and death as well. The Al Mezan Center for Human Rights reports that dozens of residents needing treatment for cancer were not permitted to leave Gaza by Israeli authorities. Some have died while waiting for a permit.

“For me, it’s a miracle in Gaza that we are still alive,” one woman told the delegation. “This is the worst time in our history.”

The March of Return is scheduled to conclude with a massive demonstration at the border fence on May 15, the day after Israeli Independence Day, known to Palestinians as Nakba (“catastrophe”) Day.§