Extractivism threatening women around the world – CIDSE
Skip to content 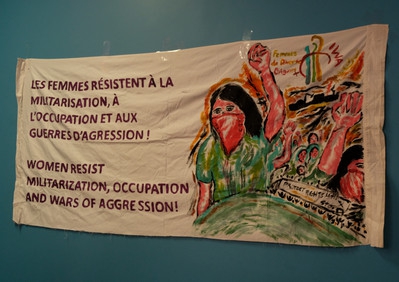 In 1846, five leaders of the Tsilhqot’in Nation in British Columbia made their way to meet with British colonial authorities in what they believed were peace talks after they had killed some British workers who had entered their land without permission. Instead, when the leaders reached the colonial authorities they were arrested, and subsequently tried and hanged. Like much of First Nations’ history in Canada, we are not taught this story in school.

Nor are we imparted with the sacred relationship that Canada’s First Nations peoples have with nature, and which led the leaders to fight the settlers in the first place to stop them from building a road to a river containing gold deposits. This relationship with nature runs so deep that when the Earth is violated so is our very being. It scars for an eternity because some wounds to Mother Earth cannot be healed.

Today, the Tsilhqot’in people must continue to defend the life of their land against exploitation from extractives companies, and even as Prime Minister Trudeau exonerated the killed leaders in March 2018, the community is still seeking justice for a mining disaster that happened 4 years ago and contaminated their river.

“As children, we are taught to respect the land, because it will take care of you into the future,” said Loretta Williams during a public panel at a three-day gathering of women leaders from around the world confronting and resisting extractivism in their communities. Williams is a member of the Xeni Gwet’in First Nation in British Columbia and the leader of a group of First Nations women calling for responsible mining. Her community fought 25 years to get a land title, which allowed them to protect their territory from a mining project. 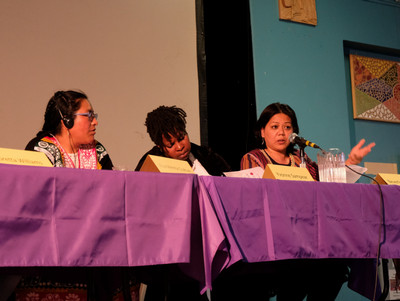 Women involved in similar struggles around the world came together at the Women Resisting Extractivism gathering in Montreal, which was co-organized by Development and Peace – Caritas Canada, and the similarity in the pain and suffering they have experienced because of the presence of extractive companies in their communities is distressing.

On the public panel, women from the Philippines, South Africa, Peru and Canada gave powerful testimonials of the nefarious impacts of these projects, including displacement, impoverishment, sexual violence, criminalization and health issues, and how women are playing a leading role in organizing resistance movements.

“I went to jail for defending Mother Earth. What a strange justice system,” said Viviane Michel, President of Quebec Native Women. She explained that she embarked on a campaign to stop the construction of a hydro-electric dam on a river in Northern Quebec and was arrested for her efforts.

The other women shared similar stories. Beverly Longid, of the Indigenous Peoples Movement for Self Determination and Liberation of the Philippines, echoed the alarming trend of governments to criminalize those who defend Mother Earth. “We are being labelled as terrorists. Leaders of grassroots organizations are not terrorists,” she said.

At the end, these courageous Protectors of Mother Earth made a plea to let her be still. To stop exploiting her, and to let her breathe and continue to give life. This message was reiterated over the weekend, as the women present expressed the inseparable bond they have with Mother Earth and that abuse to her is abuse to all women and vice-versa.

After many moments of exchange, strategizing and solidarity over the weekend, the women put together a declaration with 13 principles that enshrines their right to exercise stewardship over the lands, their sovereign governance, their livelihoods, their bodies and their cultural heritage. 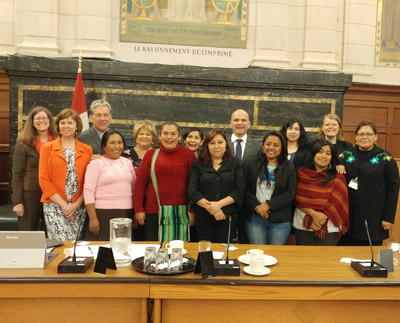 A group of 10 women travelled to Ottawa to meet with Members of Parliament and representatives of Global Affairs Canada to express these demands and share their experience of having their rights repeatedly violated, often by Canadian companies.

The women will continue the struggle against extractivism in their homelands but are stronger knowing that their sisters around the world are doing the same. And they will continue this fight until they have secured a living and breathing home for their children and all future generations.