CIDSE is advocating for a UN Treaty as a key instrument to protect human rights around the world. As part of its commitment, CIDSE attended the fourth session of the open-ended intergovernmental working group on transnational corporations and other business enterprises with respect to human rights (IGWG), which took place in Geneva from 15 to 19 October.

Political background
So far, while international law has defined the duties of states to protect human rights, it has not regulated enough the responsibility of corporations for their human rights violations. A turning point was reached on 25 June 2014, when the UN Human Rights Council in Geneva adopted a resolution on the elaboration of an international legally binding instrument on transnational corporations and other business enterprises with respect to human rights, also referred to as “UN Treaty”.

The UN Resolution called for the establishment of an Intergovernmental Working Group (IGWG) with the mandate to elaborate the Treaty. After a few years of sessions to establish the ground of the Treaty, in July 2018 the Presidency of the OEIGWG published the Zero Draft of the UN Binding Treaty which was discussed on the occasion of the 4th Session of OEIGWG this October.

This marked a decisive moment for the process towards shaping a UN Treaty that can bring value to global efforts towards preventing adverse human rights effects of business activities and providing access to justice for affected people and communities.

CIDSE analysis on the outcomes of the Geneva session: Pressure growing for a UN Binding Treaty with or without the EU’s support

CIDSE’s position towards the Treaty
CIDSE welcomes the following positive aspects of the zero draft: complementarity with the UN Guiding Principles on Business and Human Rights; focus on prevention and legal liability across the value chain; focus on improving access to remedy with an emphasis on rights of the affected people.
At the same time, CIDSE sees the need for improvements in the following areas: primacy of human rights in trade and investment policies, protection of human rights defenders, enforcement mechanisms.

For a more in-depth analysis of the zero draft text by CIDSE you can consult our “Contribution to the Open-ended intergovernmental working group on transnational corporations and other business enterprises with respect to human rights” and the article “What can the zero draft Treaty text offer to concretely improve the situation of people negatively affected by business operations?” by Denise Auclair, CIDSE Senior Advisor.

CIDSE also recently published a press release “EU must constructively engage in the UN Treaty for Business and Human Rights”.

Activities in Geneva by CIDSE members and partners
Representatives from the CIDSE secretariat attended the session together with its members CAFOD; CCFD-Terre Solidaire; Entraide & Fraternité; Fastenopfer, MISEREOR and Trócaire.

Side events
CIDSE co-organised the following two side-events in Geneva:
– “How can the UN Treaty process build upon European and international developments in the area of business and human rights?” (Palais des Nations, Tuesday 16 October, 13:15-14:45)
– “The voice of high-level religious leaders on the need for a treaty towards more accountability of business for human rights abuses” at the Palais des Nations, Room XXIII, Wednesday 17 October,13:00 – 14:30
(See flyer in attachment below)

After the session in Geneva, CIDSE also discussed the UN Binding Treaty in the panel debate “Multinationales société privée à irresponsabilités illimitées?” at the Festival des Libertés on 23 October in Brussels.

Resources from CIDSE members and allies
• The Movie “Breathless” about asbestos affecting communities in India and Belgium was presented at an event promoted by Entraide et Fraternité and others on 8th October
• Through this online tool developed by a coalition of Belgian NGOs, including our members Entraide et Fraternité and Broederlijk Delen, people can ask the Belgian Minister of Foreign affairs to defend the Treaty in Geneva and constructively engage in the negotiations.
• The report Dirty Profits 6 (by Facing Finance, supported by MISEREOR) analyses investments by European banks in extractive companies linked to violations of human rights and damages to the environment, including the case of the 2015 Fundaõ tailings dam collapse in Mariana, Brazil.
• The report ‘Defending our land and nature is our right’ (by Broederlijk Delen and other NGOs) highlights the experience of defenders in regions that suffer negative impacts of extractive industries and energy projects.
• In the opinion article Human rights, ecology should stand higher than business interests Pan-Amazonian Ecclesial Network call for the EU to constructively engage in the Treaty negotiations.
• Press release by Fastenopfer: Les entreprises suisses violent régulièrement les droits humains
• Human rights defenders campaign by Trócaire
• Regional report on violations of human rights in the Amazonia by REPAM
• Analyses L’ONU sera-t-elle enfin en mesure de nous protéger des multinationales?” by Entraide & Fraternité
• Analyses L’Union européenne dans les négociations pour un traité onusien sur les entreprises transnationales et les droits humains by CCFD-Terre Solidaire 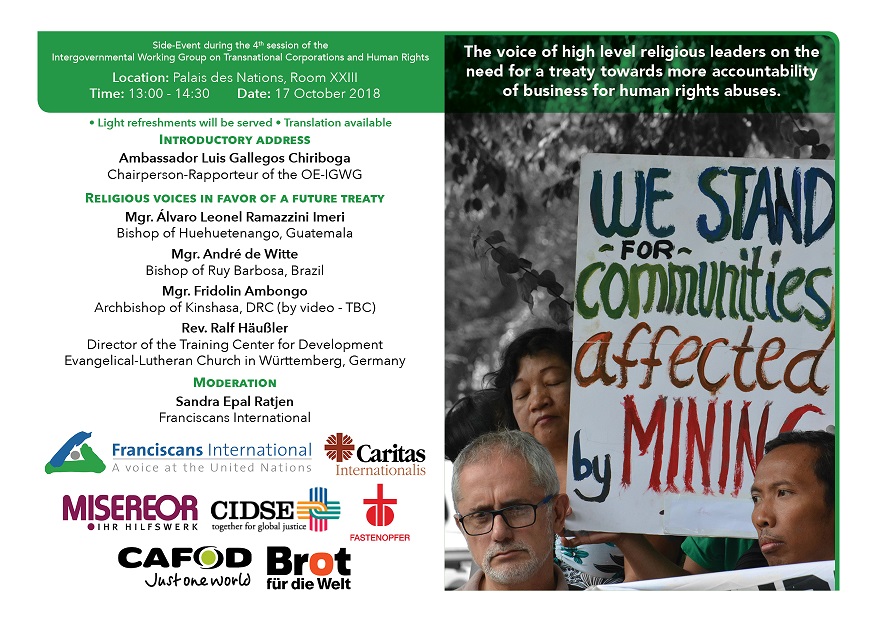