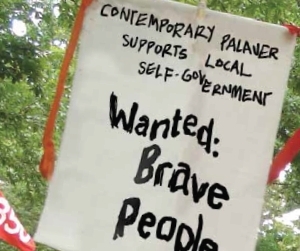 Dutch CIDSE member Cordaid and Both ENDS collected the visions and insights of seven Southern visionaries, each with a unique approach to transforming his or her dream into concrete, local initiatives. We present you their visions of sustainability based on ecological values and human rights in the run up to the UN Conference on Sustainable Development ‘Rio+20’ (20-22 June 2012). Today, Janet Awimbo, ecologist from Kenya.

Who’s looking for well-informed and engaged citizens? Not many politicians in Africa, in any case. So it takes courage to display one’s sense of public responsibility. Janet Awimbo trains citizens and organisations in how to be brave. She believes this is absolutely necessary, because Kenyans who express themselves become creative and take better care of their surroundings. Her dream is to restore the ancient African palaver, but this time with the participation of women and today’s youth!

Imagine well-informed people, who know how to present their ideas and opinions to others, who actually listen to each other, who balance all their interests and visions and make decisions together. Nobody wins the-winner-takes-all prize, and, meanwhile, everyone is reaching a compromise. Authorities who sponsor ‘open day’ activities explain how they govern their jurisdictions. For us in the West, this all doesn’t sound so incredible – even though many things still go wrong here as well –but in many parts of the world, this is only a very distant ideal.

When she was dreaming her dreams of a transparent and democratic society, Awimbo deliberately referred back to the ancient African consultation model of the palaver, which is a kind of meeting that often takes place outdoors, in the shade of a tall tree like the baobab, where people keep on talking as long as necessary until everyone comes to an agreement. The palaver is not hindered by agendas and schedules. The palaver is a typical African method and reflects the African rhythm of life.

The palaver has not disappeared; it is still very alive in rural areas, although the related notion of self-governance has faded into the background. Since the colonial powers began their domination of Africa, the traditional chiefs – as the major consultants – came under government control long ago.  Awimbo considers the palaver to be an expression of self-governance. “In a certain sense, I want to recuperate this traditional way of making decisions, with people governing themselves. It’s a system that is quite understandable. The elders determined when the seeds were to be planted, and when it was time to harvest the crops, how the harvest was to be divided, and what part of the harvest was for the poor. But the world has changed. I also want women and young people to be given a place.” She laughs: “We no longer want a group of old men making all the decisions.”

However, this form of local government takes courage, as Awimbo notes: “The courage to stop complaining, to take your life into your own hands, and to actively contribute to the development of your own neighbourhood, community and country.” Awimbo, who lives in the Kenyan port city of Mombasa, supports organisations in Eastern Africa that play a role in local palaver activities. The “Capacity for courage” is what she calls it, the ability to be brave. “I want to strengthen that capacity. This requires people being informed and feeling responsible for making decisions on how they want to live and where.” Awimbo is convinced that people want this and, “because they don’t lend themselves to pre-programming,” the results are impossible to predict.

“We are not as brave as we should be,” Awimbo observes. When she says ‘we’, she means: ‘we, Africans’. Too many people prefer hiding behind others because then they don’t have to take action themselves. “If you speak with them, they say: ‘we don’t know because no one tells us’.” She also blames those in power, who are interested in keeping others poorly informed. This turns the search for truth into an almost impossible task. “It has everything to do with power and control.” Most African politicians and traditional local chiefs don’t like sharing information. Officials at the district and central government levels are unwilling (or barely able) to provide information that would enable people to make informed decisions about their own lives. She is not positive about the media either: “We have radio, television and newspapers, but journalists do not provide us with the information necessary to close the gaps in our knowledge.” The result, Awimbo believes, is that many people have a distorted world view. “They think it is inevitable that some people dominate others. Or that change is simply impossible.”

Acting Based on the Truth

As a result, the problems of our time will continue to fester. “Everyone knows by now that natural recourses are rare. But few people are willing to seek out alternatives. They’re afraid that they’ll have to change their lives. This also applies to climate change. People deny that it exists because they’re afraid of the consequences of recognising this phenomenon. So we need people who are able to accept, and act from, the truth. That is what I mean with ‘capacity for courage’. They – and in fact this goes for all of us –must learn to face the truth and act accordingly.”

When people have access to better information and are better able to understand how they are being governed, they can respond creatively, suggesting their own ideas instead of simply waiting. “And we should have the courage and determination to demand the same of our brothers and sisters, children, neighbours, friends, and colleagues.”

Awimbo’s ideal is to have “open days” during which authorities from all levels of government explain what they do, the decisions they make and their performances, and also discuss this with their employers. Awimbo believes this does not necessarily entail, for example, the number of public toilets built, but should focus mainly on informing the citizenry. “In other words: What have the authorities, from a ministry or a municipal government office, done to increase the ‘governance literacy’ of its citizens?”

Citizens also need to get to work. Awimbo encourages them to express their ideas about how society should be governed, and to test those ideas against the opinions of others. She calls it a breeding ground: where people have the necessary space to safely discuss their ideas. “If you have an idea about your town or your neighbourhood, you need to be able to figure out if it works. Whether it is a good or a bad idea and without automatically having to join a political party. People have to feel that, through negotiation and compromise, they can achieve maybe 70 instead of 100 percent of their wishes, but that, in this way, the other parties will also be satisfied.”

Why not leave this task to the politicians? Isn’t that why they were elected? Awimbo: “Many people don’t understand that the government is there to implement the wishes of the people. They have no idea how they can exercise their influence. We must take responsibility for our own lives. But for the record: the breeding grounds are not there to replace politics, they are there to influence the decision-making processes.”

Enhanced governance is not the ultimate goal; Awimbo wants to improve governance over all of the nation’s natural resources. “It’s our water, our air, our country – what we designate as cropland, what land we need to build houses and businesses, how extensive agricultural production should be. Those kinds of decisions.”

Awimbo’s ideas stem from her profession as an ecologist; she studies the relationship between plants, animals and humans in an effort to create ecological harmony. This is quite tricky because each of the elements gets in the way of the others. The solution is a compromise in which everyone gives in a little. “I am particularly interested in how ecology affects people’s lives.”

Awimbo works together with local community organisations to carefully examine how to preserve special natural habitats, without it having an adverse effect on the people who depend on these areas for their livelihood. In other words, with and by these people. “In Africa, nature preserves are often precisely where people live. The worst thing that can happen – and which often indeed does happen! – is that decisions concerning the protection of ecologically important sites are made at the national government level, and thus excludes the people most affected by the decisions. The question thus becomes: for whose benefit are you protecting these areas? The interests of nature obviously do not always coincide with those of the people. So a balance between the two must be found and compromises must be made. A forest where a community harvests honey is essential for the people who live there: it is their traditional way of life. They sell their honey in neighbouring communities. If the forest becomes a totally protected preserve, the local residents can no longer use it to cultivate their honey and they would be prohibited from chopping down trees to create areas for their beehives. Maybe others can do this, but by rigorously protecting the forest from everyone, you also prevent the people who have a vested interest in actually protecting it from having access to it.”

‘Nairobi Used to Decide Everything’

Top-down decision-making is the normal practice in much of Africa. But Awimbo has observed some changes.  Kenya’s government is located in Nairobi, the capital, but it is in the process of transferring more and more power to the provinces. “Nairobi used to decide everything. Even the notion of ‘local’ used to be defined at the central government level. That does not work in a large and diverse country like Kenya. You cannot govern a big city in the same way you do an agrarian community. One perfect solution for all of the different regions is not feasible.”

The Kenyan government has established numerous Community Forests Associations together with the local communities in Kenya’s swampy coastal region. They give the local people the power to manage and protect their own mangrove forests. They can also analyse whether protection of the natural habitat is possible without adversely affecting local fishing. “This is what we are negotiating now. Twenty years ago, this would have been impossible in Kenya. But after much pressure from the people, it now works. Those in power have always considered the Kenyan people as a source of cheap labour, but never as a part of the decision-making process. That is changing now. That gives me much hope.”

What also makes her hopeful is how the mass media in her country are changing. “Fifty years ago, the media were totally controlled by the government and wealthy businessmen. Now anyone can voice his or her opinion. So change is possible.”
—

Janet Awimbo, ecologist, Kenya
Janet Awimbo (1964)  has been protecting nature and involving people in this effort for over twenty years. She focuses on educating and training people (capacity building), so that they can better employ their talents and skills to take their lives into their own hands. She also teaches (local) governments how to negotiate with each other and how to reach compromises. She also works on social and environmental justice, including through the Global Greengrants Fund, which she coordinates in Eastern Africa. This fund provides small grants to local groups. “For example, we have given money to a group of people who are protecting a mangrove forest near the coast.  They started a restaurant with this money. That attracts people who can experience the value and beauty of the forest.”

Awimbo has previously worked for organisations such as the Kenya Forestry Research Institute (KEFRI), the World Agroforestry Centre (ICRAF), the Impact Alliance, Pact Kenya and the NGO Resource Centre (Zanzibar). She is now a senior consultant with Casework Equatorial, helping individuals and organisations in coastal Kenya become agents of positive change.