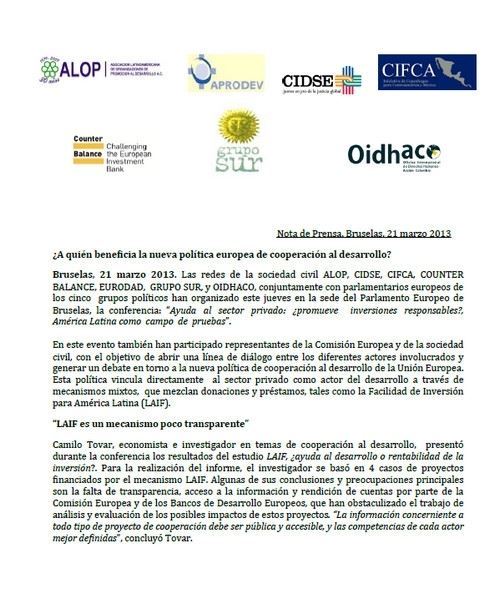 On the 21st of March 2013, the alliance of civil society organisations including ALOP, CIDSE, CIFCA, COUNTER BALANCE, EURODAD, GRUPO SUR, and OIDHACO, organised an event at the European Parliament called “Aid to the private sector: promoting responsible investments? Latin American as a testing ground”.

Participants from the European Commission and other civil society organizations engaged in a debate aimed at opening dialogues between different actors involved and at generating discussions upon the revised development cooperation policy proposed by the European Commission, which have an explicit poverty reduction focus.

This new proposed policy entails the private sector as a central development actor through ‘blending mechanisms’, known as investment facilities that mix EU grants with loans, such as the example of the EU Latin American Facility Investment (LAIF).

Camilo Tovar, economist and investigator on development cooperation issues, presented the results of four case studies of projects financed by the LAIF. Some of his conclusions and major concerns were the lack of transparency and access to information. Tovar also made some recommendations to the European Commission, suggesting that there should be better selection criteria of projects that are more focused on development rather than on financial profitability.

Civil society organisations have also expressed concerns over these new mechanism funds and raised questions on whether the end goal of poverty reduction and social cohesion in the case of Latin America, will still continue to be the first focus. To guarantee this, the alliances of NGOs have asked the European Parliament to exercise its function of democratic control and to safeguard the use of EU grants for development as initially envisaged.

It is important that before further exploring these blending mechanisms, we answer the question of who’s really benefiting from the revised European development cooperation policy.