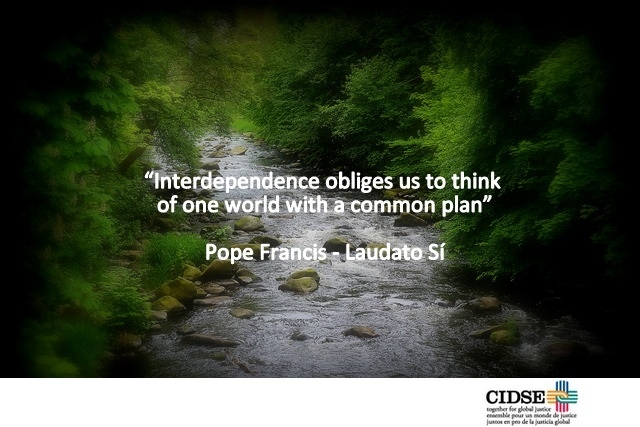 In face of the mounting ecological crisis, the Pope’s urgent call comes at a crucial moment, as world leaders will have to take critical decisions on the future of development and the care for our planet.

As the Pope states on his encyclical Laudato Si’, “The climate is a common good, belonging to all and meant for all. At the global level, it is a complex system linked to many of the essential conditions for human life. A very solid scientific consensus indicates that we are presently witnessing a disturbing warming of the climatic system […] Humanity is called to recognize the need for changes of lifestyle, production and consumption, in order to combat this warming or at least the human causes which produce or aggravate it.”

With this message in mind, many of our members have echoed the Pope’s message in different ways to spread awareness and encourage reflection on his words. Some have also provided tools to better understand the encyclical and how to share it with others.

On its campaign news, Cafod (England and Wales) highlights the encyclical’s emphasis on the relation between climate change and social inequality and provides a Q&A page that helps to understand the Pope’s encyclical. Together with SCIAF, it launched a petition asking British Prime Minister David Cameron and decision-makers to prevent climate change, a situation that is pushing the most vulnerable people into poverty.

Manos Unidas (Spain) also provides useful tools for a deeper understanding of the encyclical and what it means for all citizens on a special page dedicated to its analysis.

Moreover, a number of articles were produced by different organizations. CCFD-Terre Solidaire (France) focuses on two key messages from the encyclical, the protection of the environment and the fight to end poverty and the urgency in the face of climate change; and comments on how the encyclical is a lever for awareness and citizen mobilization.

This is also echoed in Cordaid’s (Netherlands) article, which focuses on the Pope’s leadership and highlights the encyclical’s focus on the intricate links between climate change and widespread inequality.

Entraide & Fraternité (Belgium) reminds us of the importance of the Pope’s encyclical within the framework of the UN Climate Negotiations.

Trocaire published a blog post underlining that the Pope’s encyclical is a wake-up call to a world that is progressively walking towards deeper ecological and social crisis.

Finally, to celebrate the launch of the encyclical, Broederlijk Delen’s director Lieve Herijgers recalls that climate change is strongly felt first and foremost by countries in the South and highlights the importance of alternative ways of living where solidarity is its most essential element.

Some of the CIDSE partners from different countries in the world also reported about the encyclical through articles and posts.

An article can be read on Tunupa, informative bullettin from the Fundación Solón, based in Bolivia.

Padre Dario Bossi, Combonian Missionary Father based in the state of Maranhão in Brasil, wrote a blog post in Italian and in Portuguese, relating the encyclical to a context of environmental conflicts involving local communities.

You can read here the press release: CIDSE echoes the Pope’s call for global solidarity to fight climate change and inequality through the encyclical “Laudato si’”
CIDSE and its members further discussed the encyclical during the conference: “People and Planet First: the imperative to change course” organized with the Pontifical Council for Justice and Peace. This will be preceded by a press conference on 1 July.