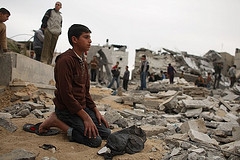 Where aid is destroyed, it might seem logical that donor countries would be eager to hold the responsible party to account – even if only to try to reclaim their taxpayers’ money (and ideally, reinvest it for its intended purpose).

Restitution (replacement) or compensation (repayment) are the main claims (see Arts. 34 – 36) which a State can make if it suffers a loss because of another state’s actions against international law. If those actions are a serious violation of one of the absolute rules of international law (which include the basic rules of humanitarian law), then all states (see Part 2, Chapter III) may also have a stake in the matter, and must cooperate to end the violations.

International humanitarian law creates presumptions that aid destruction is illegal. Generally, destruction of an occupied population’s property is prohibited (covering situations such as demolitions). In active conflict, military attacks (e.g. aerial bombings) are unlawful if they are indiscriminate, target civilian objects, or can be expected to impact them disproportionately. Since aid projects are clearly civilian (unless their use drastically changes), damaging or destroying them raises serious concerns about legality.

In either case, there are of course exceptions to the rules (absolute military necessity in the case of property destruction, and “collateral damage” in a proportionate attack on a military target where all necessary precautions were taken (see Rules 14 – 21)). However, it is up to the party claiming these exceptional circumstances to prove its case.

Enforcing such claims between states is far from easy. But where destruction and damage happens repeatedly, requesting restitution or compensation through diplomatic channels would seem to be the least a donor country can do to move from words to action.

Aid destruction in Gaza and the West Bank is a long-standing issue. In March 2012, the European Union (EU) revealed that between 2001 and 2011, Israeli forces had damaged or destroyed infrastructure funded by the EU and its Member States to the tune of around EUR 29.4 million. This was mostly during military actions in the Second Intifada, and then Operation Cast Lead (see the full damage list here). The EU had asked for compensation in cases where the project was ongoing (though none was ever received), but stated it could not do this where the beneficiary had already taken ownership.

Around the same time, reports began to multiply about demolition of and threats to aid projects in Area C of the West Bank. It was eventually calculated that between 2010 and January 2014, EU humanitarian assistance projects to the value of EUR 84 000 were demolished – not a huge sum of money relatively, but significant in its impact on the ground.

Countering destruction in Area C, counting the cost in Gaza

In May 2012, EU Foreign Ministers jointly opposed (par. 5 & 6) the destruction of aid in Area C. They stated that the EU would continue to provide aid there, and expected it to be protected. This was a promising sign of the EU starting to use its leverage against occupation-related restrictions in violation of international law.

The EU promptly followed up on this position with a EUR 7 million aid package for Area C (mostly for small-scale infrastructure and support for PA planning capacity), as well as legal aid for beneficiaries and support for a monitoring mechanism. Together with Member States – notably, France, Belgium and Poland – the EU started to get more vocal about threatened or affected projects. Discussions around systematic compensation demands also began in Brussels.

Meanwhile, Operation Pillar of Cloud was launched in Gaza in November 2012. As the tip of the iceberg, the EU established that EUR 112 500 in damage had been done to its aid projects in this context. No follow-up plan was indicated, and that was the last that was heard on the subject.

Is the EU about to ring up the Area C bill?

Interference with EU aid in Area C has not decreased overall, despite the efforts mentioned. On the contrary, in the first three months of 2015, almost as many projects were demolished as in all of 2014, resulting in an additional loss of EUR 70 000. Aid to the value of over EUR 1,5 million remains at risk. To protect it, the EU has outlined a common approach which includes an improved monitoring mechanism, and systematic reaction to threats through diplomacy and legal assistance. As for compensation, the EU and Member States will be able to request this “in case the EU engagement with Israel does not lead to a tangible freeze of demolitions.”

But what does this engagement entail, and what have the results been?

Recently, the Israeli newspaper Ha’aretz reported on an EU-Israel “structured dialogue” on Area C, which was proposed by the EU in late 2014 and only accepted eight months later. Reportedly, Israel has agreed to this dialogue on condition that it focuses on economic issues, steers clear of the settlement issue, and remains low-level. Not much to write home about, considering that the dialogue was proposed in the context of the EU’s concern over ‘red line’ developments in Area C (including settlement expansion in sensitive areas and the planned transfer of Bedouin communities from E1).

Almost a year has passed since the original dialogue proposal, and there has been no durable positive change on the ground. The EU and Israel have many other official dialogue channels, and the issues at hand are not new by any means. Yet the EU and its Member States’ ability to demand redress for aid destruction seems to have been tied to this process, of which the timeframe (if any) is unknown.

Following the July/August 2014 hostilities, the scale of damage to aid-funded infrastructure in Gaza remains unknown. Preliminary results of a joint damage assessment (led by the Palestinian consensus government and involving the EU, UN and World Bank) were expected in early 2015, but have not yet been released. However, the European Commission has already indicated that the North Gaza Emergency Sewage Treatment facility (funded by the EU and other donors) sustained a loss of USD 123 000. To date, questions are still unanswered about the nature and cause of this loss, and how accountability will be ensured if foul play was to blame.

As suspended as the process of accountability for destruction seems in the West Bank, it appears to be non-existent in Gaza. There are two main reasons for this.

Firstly, F-16s don’t leave a paper trail. The demolition of aid projects in Area C is based on well-known, ongoing administrative policies – including enforcement of the Israeli-imposed planning regime, which in turn serves the settlement enterprise. It is quite clear to Europe that destruction on these terms is not warranted by any criterion of military necessity, and the EU recognizes it as “counter to international law” (par. 2). The damage in Gaza, on the other hand, has mainly been a result of military operations. In such situations – especially in isolated Gaza – it becomes more difficult to determine facts from the outside, and damage can therefore be more easily explained away as the unfortunate consequences of war.

Secondly, the political will to act on Area C is driven by the EU’s aim to preserve the possibility of a two-State solution. This logic has propelled the EU’s much-publicized assertiveness on settlements, but has so far not been effective in rallying efforts on Gaza, despite recognition that the Gaza/West Bank connection (par. 3) is also vital to this objective.

Thus, Gaza faces extra legal and political hurdles to claim even this small slice of justice. But with the EU’s recent endorsement (par. 2) of accountability as a cornerstone of peace, these issues should continue to be highlighted.

If the EU and its Member States will not start with establishing (civil) accountability for actions touching upon their own interests, then where will they start? Moving forward, the facts of destruction need to be established as far as possible, hard questions need to be asked of those responsible, and remedies need to be demanded if the answers are not satisfactory.