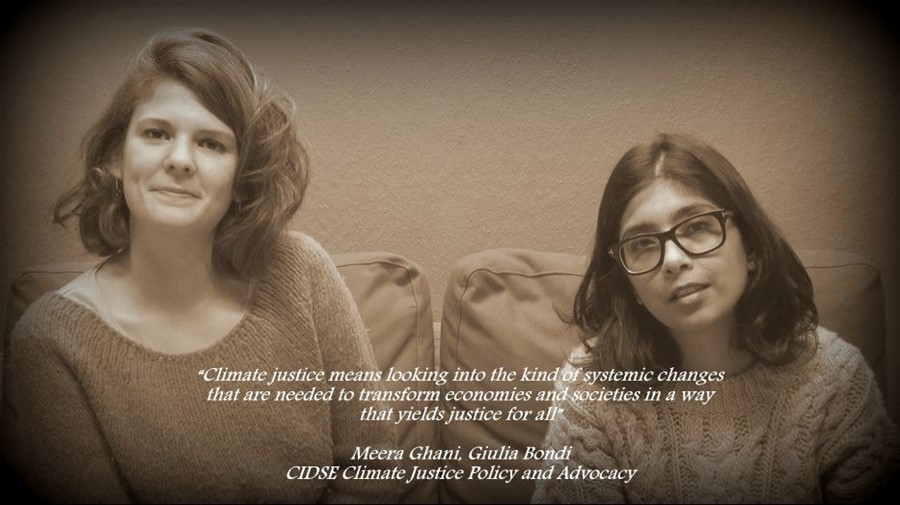 Just a few days ahead of COP21, how will climate justice be translated within the agreement to be reached? What are essentially CIDSE’s political asks towards COP21? And why must political action go beyond the negotiations in Paris?

The world is preparing for one of the most important events of the year – the UN Summit on Climate Change (COP21). After the failure at Copenhagen in 2009, a new approach was needed to turn things around. Countries around the world committed to reaching a new climate agreement in 2015 and, in preparation, each country was invited to outline what post-2020 climate actions they intend to carry out under the new climate agreement(1) , the INDC’s. But there’s still a long way to go.

Meera Ghani and Giulia Bondi form the Climate Justice Policy and Advocacy team at CIDSE. In this episode of our ‘Stories for Climate Justice’ series, they tell us about CIDSE’s political asks at COP21, how they will evaluate the outcomes and why it is important for all citizens – women, men, young and old – to participate and get mobilized for climate justice.

The climate crisis reflects the crumbling pillars of an economy and a society that are faltering to protect nature and humanity. Climate justice therefore means to increasingly make the linkages between the climate crisis and the many other symptoms of structural injustices that are in place and are based on an extractivist economic and development model, such as increasing inequality, food insecurity, and poverty.

Climate justice therefore requires a great mobilization of people and consciences around the world, to imagine “the systemic changes that are needed to transform economies and societies in a way that yields justice for all”.

This is why CIDSE and its members have issued a publication ahead of COP21, outlining the political asks addressed to political leaders and negotiators in Paris, but also beyond, looking at a new vision and narrative for change, greatly inspired by the Pope’s recently published Encyclical ‘Laudato Si’’.

The main political asks included in ‘Paris, for the People and the Planet’ include the complete phase out from fossil fuels by 2050 and a transition towards renewable energy for a clean and safe future; a temperature threshold set to 1.5°C as the 2°C target set at Copenhagen already presents high risks for some regions and vulnerable ecosystems, such as the Pacific Island states; a strong commitment on climate finance to enable developing countries to cope and adapt, and most importantly, that the agreement should focus on a human rights based approach, to avoid that any climate action or climate related measure incurs in human rights violations.

At the sight of the challenge ahead, we are called to act decisively, starting from our everyday life choices and lifestyles, and particularly, uniting efforts to build a just and more inclusive society. Younger generations are especially concerned, as they will be the bearers of a much more unpredictable climate and society. Let’s unite for Climate Justice!