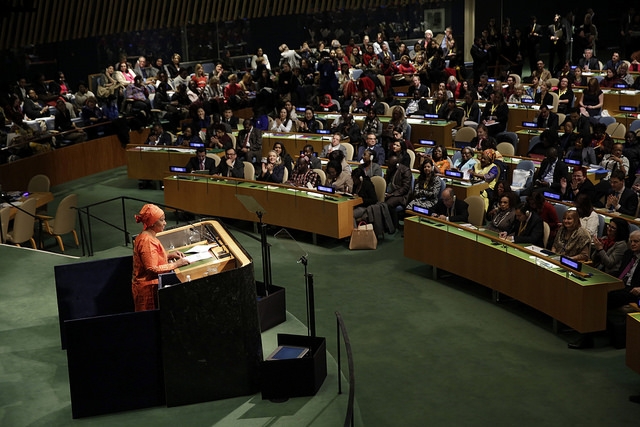 Tanja Haque, CAFOD’s Gender Advisor, discusses the role of faith at the 61st session of the Commission on the Status of Women.

Last year, I attended the Commission on the Status of Women (CSW) for the first time which also happened to be the year the CSW officially recognized the role of faith-based organisations in advancing gender equality and women’s empowerment (paragraph 23 of the Agreed Conclusions).

What better way to build on this momentum than to return the following year for the sixty-first session of the CSW in the company of one of our church partners, Father Javier Marquez Acosta, the Director of the Social Pastoral Secretariat of the Colombian Bishops Conference. Fr. Javier has worked for many years in Córdoba in the Diocese of Montelibano with Indigenous women’s organisations, such as the Tierralta Women’s Network, to support their efforts defending their territory and rights. His close commitment to the work in this region, which is severely affected by the conflict, has enabled him to develop an excellent knowledge of the impact of the armed conflict on communities.

For decades the actions of guerrilla and paramilitary groups and the post-demobilization have converged in the municipality of Tierralta, and as a consequence women living there have faced high levels of violence. The women’s network there is made up of more than 160 women, who are striving to make visible intra-family and social violence, protect survivors and raise public awareness of protection and advocacy work on this type of gender-based violence.

Fr. Javier took part in two key events organized by significant gender and faith networks that CAFOD is a member of: Side By Side Gender Justice Movement (SbS) and the We Will Speak Out Coalition (WWSO). Side by Side is an international faith movement for gender justice and it was formally launched at the CSW on March 17th in the Sanctuary of St. Peter’s Church, providing an opportunity to learn from faith leaders around the world how they work together in their communities to challenge barriers and advocate for gender justice. The launch highlighted the importance of religion and faith leaders in the pursuit of gender equality and sustainable development, and was aimed at creating an opportunity for discussion on the intersection of religion, gender justice and sustainable development.

On the following day, both SbS and WWSO, which is an international faith-based coalition against sexual and gender-based violence, held a joint event at the UN’s Church Centre titled: “Leaving No-one behind: women’s economic empowerment, sexual and gender-based violence and faith”. Fr. Javier was part of an international panel that spoke on the role of faith in addressing stigma and social barriers to economic empowerment and participation for the most marginalized women. Fr. Javier shared his experience from the perspective of a faith leader highlighting the vital role of faith groups in challenging harmful social norms, addressing key barriers to women’s social and economic inclusion and providing much-needed pastoral accompaniment and spiritual support to survivors of sexual and gender-based violence.

For Fr. Javier it was his first time participating in the CSW and, in fact, his first time in the United States, where he got to experience snow for the first time, which resulted, as you can imagine, in many pictures being taken! Let’s hope this will be one of many international gender equality events CAFOD and CIDSE partners like Fr. Javier have the opportunity to participate and be listened to.