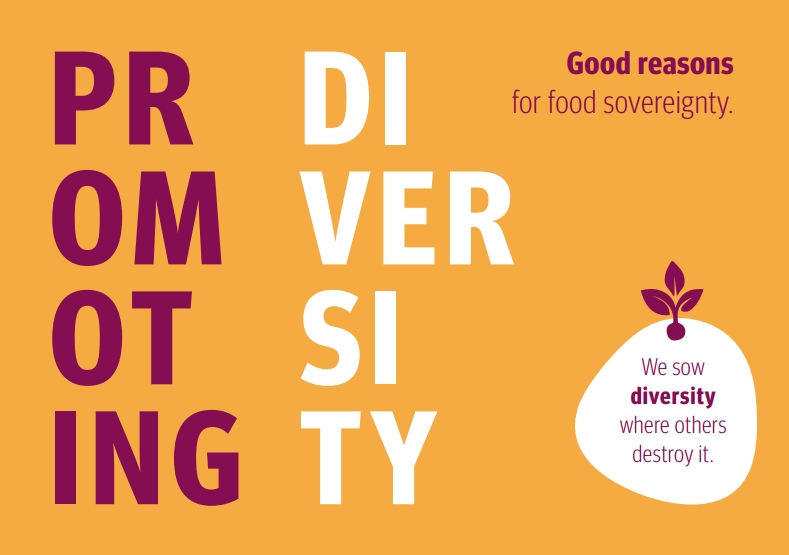 (Aachen/Asunción, 11 October 2017) With World Food Day on 16 October approaching, MISEREOR – the German Catholic Bishops’ agency for international development cooperation – is concerned about the burgeoning power of agribusiness and its negative impacts on people and the environment. “Not only is the agribusiness model unsustainable: it also does little to combat hunger in the world on a lasting basis,” says MISEREOR’s Chairman and Director General Pirmin Spiegel. According to the Food and Agriculture Organization (FAO), the number of chronically undernourished people in the world has risen for the first time in a decade and now stands at 815 million.

The impacts of resource-intensive industrial agriculture are particularly visible in South America, where the production of soybean for export to China and the European Union (EU) now covers around 57 million hectares – an area one and half times larger than Germany. “Just a few decades ago, Paraguay was able to feed itself. Today, it is a major food importer. The widespread application of agrochemicals on the fields contaminates water resources and the foods people eat; some of these chemicals are highly toxic. Pregnant women in rural areas say that they are worried about the serious harm that toxic pesticides may be causing to their unborn babies. Not to mention the other problems: deforestation, land grabbing and the increase in violence resulting from land conflicts between small-scale farmers and large landowners. The farming families are the clear losers: their livelihoods are vanishing, along with their seeds and a good part of their cultural heritage,” says Pirmin Spiegel. Currently in Paraguay, he is meeting with smallholder farmers, researchers and MISEREOR partners in order to learn more about the situation in local agriculture and the shared challenges on the path towards a secure and culturally appropriate supply of healthy food.

According to MISEREOR, an agricultural model which is based on large-scale use of pesticides and costly genetically modified seed cannot possibly make a sustainable contribution to solving the global food crisis. On the contrary, the excessive use of toxic agrochemicals poses a real threat to the natural resources on which sustainable farming depends and puts the health of rural workers, small-scale farming families and local communities at risk. More than 41 million people worldwide are already suffering from the adverse effects of pesticides. In early October, the French government announced that it will vote against the proposed renewal of the European licence for the weedkiller glyphosate and plans to ban its use by 2022. “We want to see a similar commitment to non-renewal from the German Government. There is still no clear evidence that glyphosate is safe to use,” says Pirmin Spiegel.

And he explains: “Small-scale farmers use sustainable methods which are suited to local conditions and preserve crop diversity – and this can make their farming systems more resilient to the impacts of climate change.” According to a report by the United Nations, climate change is increasingly contributing to the emergence of hunger. The planned merger of Bayer AG with seed and agrochemicals producer Monsanto is based on outdated logic, he says. And Bishop Juan Gavilán from Paraguay takes a similar view of this purported “progress”, which he believes simply worsens poverty. Pirmin Spiegel sums it up: “Instead of investing energy solely in shoring up an agricultural model that increases the power of a small number of big businesses, we want the EU and the new German government to prioritise policies that support small-scale farming
families and recognise their potential. They produce 70 per cent of the world’s food using just 30 per cent of its land and water resources. So it’s clear that they make a vital contribution to world food security and resource conservation. Supporting small farmers is the only way to combat world hunger sustainably, based on a holistic understanding of food and nutrition.”

MISEREOR Chairman and Director General Pirmin Spiegel is visiting Paraguay and Ecuador until 13 October 2017. His programme includes meetings with the Paraguayan Episcopal Conference’s indigenous affairs organisation (CONAPI), with small-scale farming families affected by soybean cultivation, and with BASE IS, a research institute which is investigating Monsanto, human rights violations and resource conflicts.

Information from MISEREOR about how the burgeoning power of big business is impacting on small-scale farmers in countries such as Paraguay is available here: www.misereor.org/seed-for-diversity

MISEREOR’s brochure on food sovereignty presents facts and figures in a clear and accessible format and can be downloaded here: https://www.misereor.org/fileadmin//user_upload/misereor_org/Cooperation___Service/englisch/promoting-diversity.pdf

MISEREOR is the international development agency of the Catholic Church in Germany. Since 1958, MISEREOR has been fighting for justice and against hunger, disease and social exclusion and their causes. Together with our local partners, we support any person in need, regardless of their religion, ethnicity or culture. Over the past five decades, MISEREOR has delivered more than 107,000 projects in Africa, Asia, Oceania and Latin America. It is a member of Alliance Development Works: www.entwicklung-hilft.de.