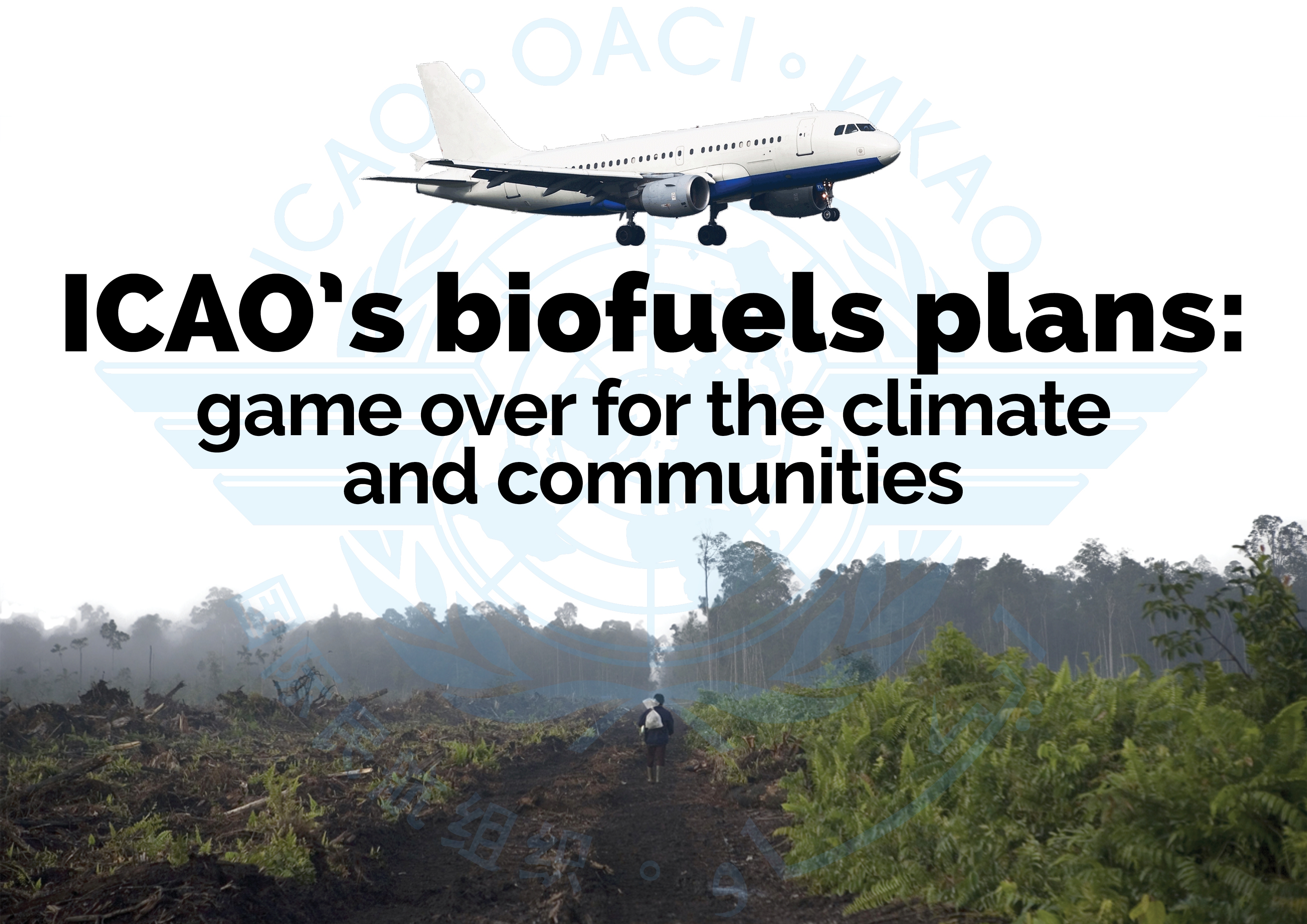 Environmental and development organizations from five continents have today written to the UN’s aviation agency (ICAO) condemning a proposal for large-scale use of biofuels in planes.

The letter signed by 96 groups states that using biofuels on a vast scale will inevitably lead to further palm oil expansion [1], which will cause more deforestation, increasing climate-changing emissions, and more land grabbing and land and human rights abuses. The proposals will be discussed this week (October 11-13) by the International Civil Aviation Authority (ICAO) at its Conference on Aviation and Alternative Fuels in Mexico City.

According to ICAO’s “Vision” proposal, the aviation industry would use 5 million tonnes of biofuels a year from 2025, which will be scaled up to 286 million tonnes by 2050 – more than three times the amount of all biofuels produced today [2]. It is part of an attempt by the aviation industry and ICAO to maintain high levels of aviation growth while presenting them as “carbon neutral” from 2020 [3].
An in-depth report released by Biofuelwatch last week [4] shows that feedstocks (raw materials used to produce biofuel) other than palm oil cannot be converted to aviation fuels on a large scale either because of technical obstacles or for economic reasons.

Mary Louise Malig from the Global Forest Coalition, one of the signatories of the Open Letter said: “Biofuels are already responsible for large-scale deforestation, and for more land-grabbing, human rights abuses, loss of food sovereignty and food security. Fuelling planes in addition to cars with them would magnify those serious impacts while doing nothing to address climate change.”
Almuth Ernsting from Biofuelwatch said: “If ICAO members pass the Secretariat’s proposal, they will be sending a dangerous signal to palm oil companies worldwide, who will be the main beneficiaries and who will be keen to use it as an opportunity to grab yet more land for plantations.”

Greenhouse gas emissions from international aviation grew by 87% between 1990 and 2014 [5] and are rising faster than those from almost any other sector. The organizations emphasize that there is an urgent need to reduce that spiraling growth if the world was to have a chance to meet the commitments of the Paris Agreement.

“The airline industry wants us to believe it’s going green, while dramatically increasing its carbon emissions between now and the middle of the century. Their solution is to use more biofuels – meaning palm oil – which will simply accelerate the destruction of the world’s rainforests. Why should other sectors have to reduce their emissions and airlines get off the hook?” said Julia Christian, a campaigner at the forest NGO Fern. “

Carlos Calvo Ambel, climate and analysis manager at Transport & Environment (T&E), said: “Air travel has been growing exponentially, fuelled by public subsidies such as no fuel tax and little or no VAT. The biofuels hype should not be used as another greenwashing measure. Instead, ICAO should make aviation pay its fair share of taxes and promote measures that do reduce aviation emissions.”

Notes:
[1] The letter is available at www.biofuelwatch.org.uk/2017/aviation-biofuels-open-letter
[2] The ICAO Secretariat’s “Proposed ICAO Vision on Aviation Alternative Fuels” can be found at icao.int/Meetings/CAAF2/Documents/CAAF.2.WP.013.4.en.pdfCAAF.2.WP.013.4.en.pdf. Note that all of the potentially available “alternative fuels” are biofuels.
[3] ICAO’s Assembly in October 2013 adopted a global aspirational goal of “carbon neutral growth from 2020”, see: icao.int/environmental-protection/Pages/A39_CORSIA_FAQ1.aspx
[4] The Biofuelwatch report “Aviation biofuels: How ICAO and industry plans for “sustainable alternative aviation fuels” could lead to planes flying on palm oil” can be downloaded at biofuelwatch.org.uk/2017/aviation-biofuels.
[5] unfccc.int/resource/docs/2016/sbi/eng/19.pdf