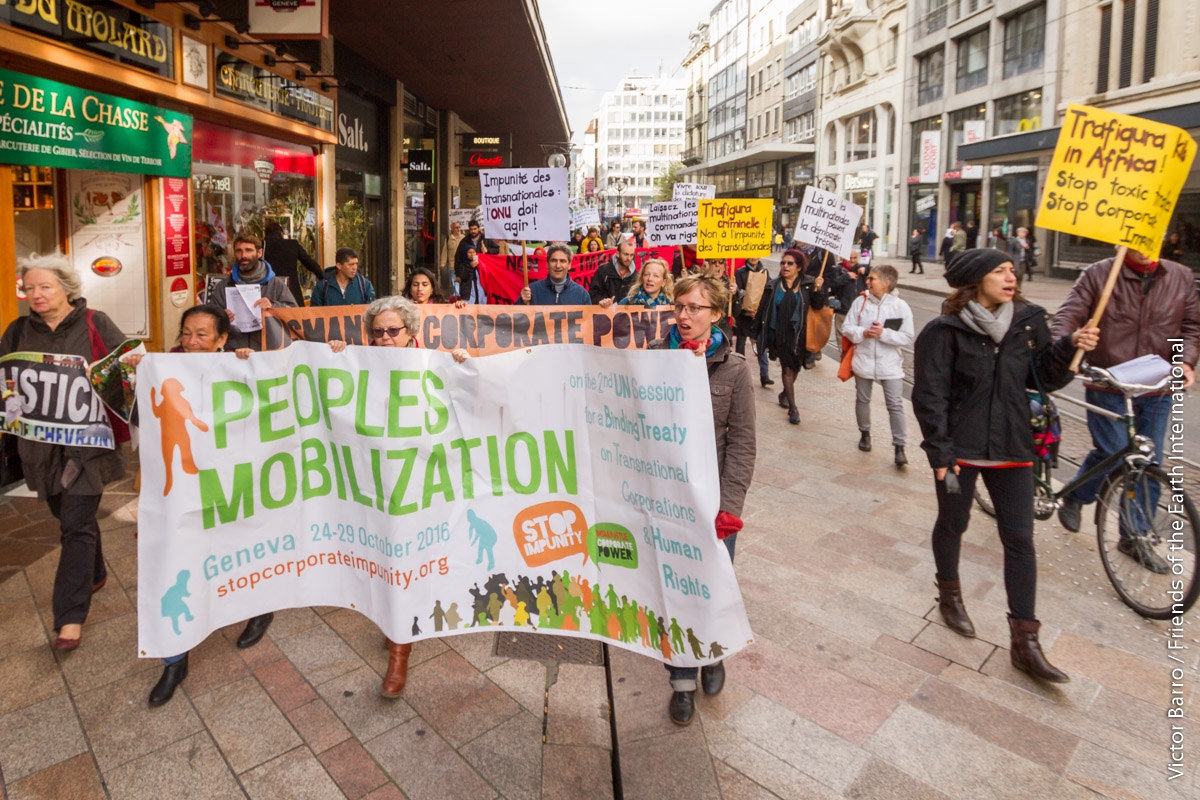 A resolution voted by the EP today joins a growing number of actors who are actively supporting the UN Binding Treaty, however the EU has not engaged enough so far. Ahead of an important decision in the Council on 10 October regarding the EU’s participation in the process, it is time to step up!

Today the European Parliament (EP) has voted on a resolution in favor of a UN Binding Treaty as a crucial instrument to keep the activities of transnational corporations (TNCs) under control and to guarantee the primacy of human rights and the care for the environment.

There are far too many examples of human rights abuses occurring as a result of transnational corporations’ activities, that have until today been able to take advantage of loose regulatory frameworks. The UN Treaty has the potential to greatly improve this situation. The next session of the body in charge of the Treaty, the Open-ended intergovernmental working group on transnational corporations and other business enterprises with respect to human rights (IGWG) is coming up soon (15-19 October) and it is essential that further steps are taken.

In its resolution the EP asks “all the EU and its Member States to engage genuinely and constructively in these negotiations” and “highlights the paramount importance of the EU constructively contributing to the achievement of a Binding Treaty which will effectively address the issue of corporate liability for human rights violations and related challenges”.

The EU has in the past tried to slow down the Treaty process, failing to demonstrate leadership and proactivity to seize the potential of an international legally binding instrument to strengthen human rights protection. It is now time to put people first, guarantee them access to justice, and to make sure that corporations are properly regulated, ending an asymmetric balance that has been harmful to many communities.

Church actors have increasingly spoken strongly in favor of more adequate regulation of TNCs to protect human rights- Pope Francis has led the way with his publication of the Encyclical Laudato Si’ in 2015. In June this year, the Permanent Observer of the Holy See to the United Nations in Geneva said in a statement: “Given the transnational nature of both economic freedoms and human rights, robust transnational legislation has to be promoted to support Governments in their duty to protect against third-party human rights abuses.” In March, in a Pastoral exhortation, the bishops of Latin America sent a powerful call expressing the need to care for our common home, in defense of the rights and territories of the communities. This call came after many negative experiences in Latin America with TNCs such as mining companies, who operated with disastrous consequences on the lives and environment of the people, while escaping accountability. In light of such experiences, European bishops have asked the EU to play a constructive role in process towards a binding Treaty.

Other recent expressions of support are this open letter signed by more than 150 scholars and experts strongly advocating for a Binding Treaty, statements from national human rights institutes in France and Germany as well as a position statement from the European Trade Union Confederation.

Civil society, coming together in the global Treaty Alliance, of which CIDSE is a leading member, have for years advocated for a Treaty, bringing the voices of people directly living the consequences of corporate abuse.

The EU can’t fail to listen to such a broad range of actors!

The next IGWG is an especially crucial session, which follows the publication of a “Zero draft” of the Treaty text. CIDSE considers this text as a good starting point to kick off the negotiations, but points out some improvements needed such as the guaranteeing the primacy of human rights in trade and investment policies, the protection of human rights defenders and the need for stronger enforcement mechanisms (see our analysis here).

On October 15-19, we will be in Geneva advocating for a binding Treaty together with our members, partners, allies. We expect the EU and its Member States to participate in the 4th IGWG session, making constructive proposals towards a Treaty that can help put a stop to human rights abuses in the context of business activities.