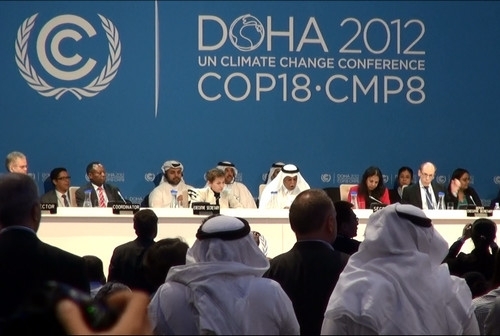 The expectations of the latest round of global climate talks (26 November – 7 December, Doha, Qatar) were low, but governments failed to meet them nevertheless. The conference gave us no progress today, but a slightly better chance of steps forward tomorrow.

The absence of new carbon cuts in Doha leads the world straight towards catastrophic climate change, with no shelter for the poorest and most vulnerable people already facing its increasingly violent impacts.

Several authoritative reports, including a World Bank report indicating that we are on our way to a +4 degrees Celsius world, rang the alarm bells ahead of the conference. Nevertheless, governments arrived in Doha empty handed with neither the political will or a mandate to take ambitious action.

Governments thus steered away from a safer and more equitable world, only doing the bare minimum to keep on track towards a new global climate deal by 2015.

A second commitment period of the Kyoto Protocol, currently the only binding international climate regime, was agreed in Doha, but it only covers around 15% of global emissions. The world’s biggest developed country emitters don’t take part in the Protocol, while the European Union has already reached its own target to reduce emissions by 20% by the year 2020. The eight-year second commitment period also has loopholes that allow carry over, use and trading of ‘hot air’, or unused carbon permits.  The Doha outcome does include a call for the Kyoto Protocol countries to review their emissions reduction target in line with the 25-40% range by 2014 at the latest when a new scientific report by the IPCCC is released. While it could have been stronger, the decision reinforces a clear moral obligation for countries to increase their emission reduction targets prior to 2020 and provides opportunities for them to do so.

Climate funds announced in Doha by Denmark, Finland, Germany, Sweden, the Netherlands and the UK are a first step and welcome move after too long a silence. However, the money put on the table is far from what is needed to fulfil existing needs and meet prior commitments. Developed countries failed once more to indicate how they are going to scale up climate finance towards $100 billion per year by 2020, as agreed back in 2009. In order to plan adaptation efforts, for developing countries struggling with the increasingly violent impacts of climate change it is crucial that finance is predictable and can be monitored, reported and verified.

In Doha, governments agreed a new work program on ‘loss and damage’, which refers to the harm caused by climate impacts when mitigation and adaptation efforts have failed. They recognised that climate-related loss and damage is already happening and affected countries should receive compensation. This is an important achievement, even though details still have to be worked out.

The importance of agriculture was not reflected in the talks, even though the sector, and small-scale food producers in particular, are severely impacted by climate change. CIDSE organisations work on the ground with smallholder farmers and know from experience that small-scale farming can help communities deal with food insecurity and climate change, but decision-makers still have to recognise this potential.

So, looking back at Doha and forward to the next round of talks in Warsaw, Poland (November 2013), where are we?

The sobering conclusion is that in Doha world leaders allowed climate change to continue to spiral out of control, which makes it more difficult for the world’s most vulnerable people to cope with increasingly extreme weather. At the same time, they are left in the dark about the support they can expect for urgent adaptation and mitigation measures.

Governments should start moving from their current positions and finally put the common good ahead of short-term interests. As a climate champion, the EU should lead the way by increasing its own emission reduction target which it has already met, several years ahead of the 2020 deadline.

The EU and other developed countries should also urgently provide clarity about how they are going to keep their financial promises. The $100bn figure must be met exclusively from public sources, and can be realised without putting budgets under further strain using innovative sources such as a Financial Transaction Tax.

In Doha, some initiatives aiming at boosting climate ambition were presented. The Scottish government, which has passed one of the world’s most ambitious climate policies, will host a high-level conference on climate change and human rights in 2013. UN Secretary General Ban-Ki Moon announced he wants to gather world leaders in 2014 to raise ambition on climate change. This meeting should prepare the ground for the crucial round of climate talks to be held in France a year later.