How do we get the EU to back global binding rules for business and human rights? – CIDSE
Skip to content 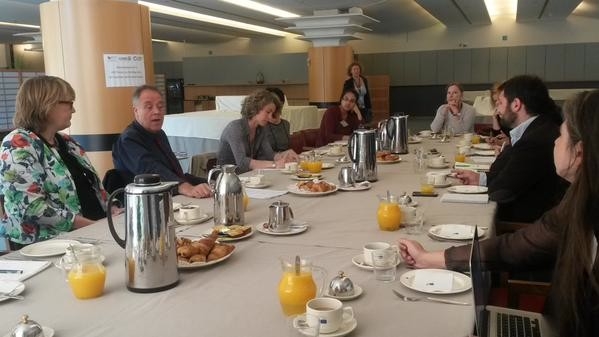 Last year, all 28 EU member states tried to veto the development of a UN treaty that would require businesses to respect human rights in their global supply chains, and make sure those whose rights are compromised have the opportunity to make legal challenges. Human rights aren’t voluntary for EU member states – so how do we overcome this opposition to making them mandatory for corporations?

A number of MEPs known for their engagement on corporate accountability issues joined to brainstorm on how the European Parliament can support the UN process – Judith Sargentini from the Greens, Barbara Lochbiler, from the Greens, and Anne-Sophie Mineur, from the United Left/Nordic Green Left, all joined along with policy advisers and other MEP assistants.

At last year’s UN Human Rights Council in Geneva, the wheels were set in motion for an international treaty to make sure transnational corporations respect human rights. A UN resolution was passed to create an open-ended intergovernmental working group*, despite strong opposition from western countries.

This year, this group will meet for the first time on July 6, aiming to set the foundations for such a treaty. Governments from around the world will have to discuss the scope of the treaty, the type of human rights it will address, and the type of companies to which a treaty would apply.

Martin Drago, from Friends of the Earth Uruguay, reminded those present at the meeting of the strong support for a treaty from civil society in developing countries, where at present there are many obstacles for those seeking legal redress for corporate human rights abuses. A global treaty would also address the imbalance of power created by legal systems that lets corporations sue countries.

Richard Howitt recalled that the UN Guiding Principles on Business and Human Rights have never been a substitute for binding standards at international level. They are an important step forward but five years after their adoption, it is time both to advance their implementation and to begin a new phase setting the foundation for international binding rules.

Denise Auclair, CIDSE, added that the implementation of these Guiding Principles at national level must go hand in hand with the development of international binding rules. Individual action at the national level only cannot address the issue of corporate accountability – which is a global issue. She shared concerns that not only were the EU and most governments obstructing the process, they are also avoiding public and political debate about it.

The discussions led to suggestions for actions to ensure the European Commission puts this issue on the agenda. It was proposed to better make the link with the current trade discussions as well as strengthen the mobilisation at national level to push states to engage in the process. The MEPs present committed to promoting the treaty process internally to the European Parliament, giving more visibility to the issue.

Participants suggested getting MEPs to attend sessions in Geneva and argue for a treaty, showing that Europe is not a unified block. France agreed to join as an observer and Switzerland will participate: it is not too late for other countries to join the discussion.
The Treaty Alliance, which gathers hundreds of NGOs and social movements around the world, is organising a series of actions in the run-up to the July negotiations. You can find more here.

* The mandate of this working group is to “elaborate an international legally binding instrument to regulate, in international human rights law, the activities of transnational corporations and other business enterprises”.