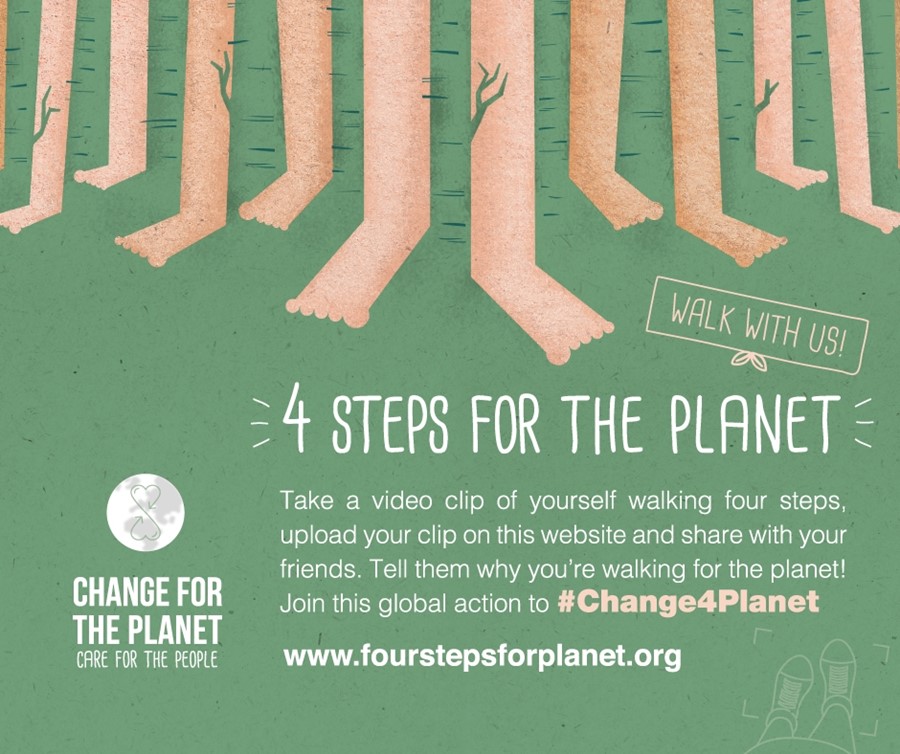 As Paris COP21 is approaches, let’s take four steps for the planet! We walk for transformative, systemic change, for a radical change in individual and collective lifestyles, for alternatives that exist and work, and for climate action now!

On the way to Paris COP21, the campaign “Change for the Planet – Care for the People“, launched by CIDSE and its members, invites you to take four steps for the planet, and join this movement for transformative change, by engaging in every-day lifestyle changes, while walking together to raise common concerns and demands to decision-makers.

Why four steps? Each step you take represents one core message of this global campaign. They evoke both the transformative change we need for the planet and for the people, as well as what we expect from decision-makers in Paris.

This action is inspired on the commitment of the pilgrims, volunteer, and all those who are walking in different parts of the world and from different parts in Europe to Paris, in a united call for climate justice and decided action at this crucial time in history. Their steps remind us of the consciousness we need in order to embark in a journey of personal, spiritual change and the solidarity we must forge with one another to bring about a culture of care.

As they arrive to Paris, we will be walking together with them on the 29th of November for the Global Climate March. We will be walking for transformative change, for changing our lifestyles at the individual and collective levels, while committing to working with others on solutions and alternatives that foster solidarity and care for the environment. We will be uniting our voices for climate action now!

1. Take your camera, tablet or smart-phone.

2. Film a video-clip of your feet – viewed from above – walking four steps (a few seconds long). You can be creative with     your feet.

3. Upload it to this site: www.fourstepsforplanet.org

4. Share with your friends and invite others to join the movement!

5. Tweet to your national government representatives, ministers or negotiators. Let them know why you’re taking four steps for the planet! Include the campaign’s hashtag #Change4Planet