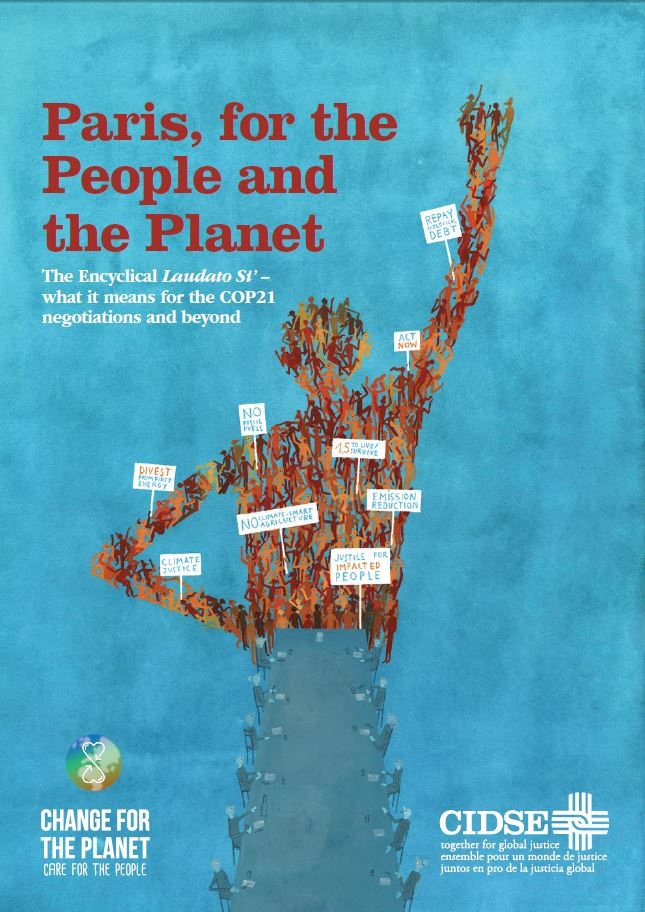 A new report, inspired by pope’s Encyclical Laudato Si’ and published one month before the beginning of COP 21, sets out CIDSE’s vision for the Paris agreement, which should put the moral dimension of climate change at its core

(Download the report from the attachment below in English, French and Spanish)

The world needs to raise its ambition to much higher levels to tackle the climate crisis and protect the people from climate change effects, states a report released by CIDSE today, one month ahead of the beginning of the climate change conference COP 21 in Paris. The report “Paris, for the People and the Planet” outlines what the coalition of 17 Catholic development agencies recommends for the Paris agreement, and it explores what the Encyclical means in relation to the climate negotiations.

Based on evidence from CIDSE’s partners, poor communities and scientific studies, we know that a changing climate is already manifesting its devastating effects. Acknowledging this dramatic truth, and inspired by the Encyclical’s forward-looking vision, CIDSE stresses that governments should place the poorest communities who are suffering the most from climate change impacts at the centre of the debate. “Governments should remember that the ecological crisis is not just an economic and an environmental issue, but also a moral one. The livelihood and the very existence of many communities, such as the low lying islands of Oceania, the coastal communities of Bangladesh, farming families in Africa and many others, are directly at stake” said Bernd Nilles, CIDSE Secretary General.

CIDSE advocates for a Paris agreement that should foresee the phasing out of all fossil fuel emissions and the move towards a 100% renewable energy future with sustainable energy access for all. It should ensure that a 1.5°C threshold is enshrined in a legally binding global agreement, set a goal for complete decarbonisation by 2050 and establish 5-yearly reviews of pledges to ratchet-up ambition. Furthermore, in order to pay the “ecological debt” owed to poorer countries, rich countries should deliver adequate, predictable and timely climate finance to poor countries.

There are a number of other issues which should additionally form part of the Paris Agreement discussions, such as the operationalising concept of human rights and its links with food security and gender equality, and the need to provide electricity to billions who don’t have it. We also wish to challenge the current economic model of growth and the exclusive focus on market-based solutions.

“Paris, for the People and the Planet” presents people-driven initiatives as pivotal to reach climate justice. The CIDSE campaign “Change for the Planet – Care for the People” referred to in the report, encourages people to challenge their daily choices and to demand systemic change through mobilization.

Notes to the editors:
-CIDSE is an international alliance of Catholic development agencies working together for global justice. Our 17 member organisations from Europe and North America come together under the umbrella of CIDSE to fight poverty and inequality. We challenge governments, business, churches, and international bodies to adopt policies and behavior that promote human rights, social justice and sustainable development. www.cidse.org

-The paper is available in English, French and Spanish.

-Find out more about the campaign: Change for the Planet- Care for the People: https://www.cidse.org/rethinking-development/change-for-the-planet-care-for-the-people.html

-Click here to watch our “Stories for Climate Justice” series, featuring interviews of people struggling with climate-related challenges, including an intervention from the Prime Minister of Tuvalu, a small island state threatened by the rising of the oceans’ levels.

-Click here to watch a series of interviews filmed by CIDSE about the encyclical, including speakers such as Naomi Klein (author), Mary Robinson (Mary Robinson Foundation), Victoria- Tauli Corpuz (UN Special Rapporteur on the Rights of Indigenous Peoples), Peter Turkson (President of the Pontifical Council for Justice and Peace).