Press release: No more conflict minerals- EU States need to approve a law that stops the suffering of many people – CIDSE
Skip to content 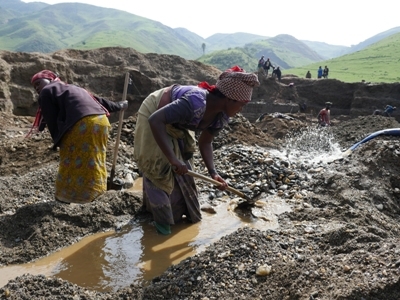 CIDSE and its members call on EU leaders to agree a mandatory, comprehensive supply chain due diligence to put an end to conflict minerals in a new policy briefing, together with a video reportage filmed in a mine in the Democratic Republic of the Congo (DRC) and a video message by Mgr. Fridolin Ambongo (DRC).

Two weeks after the beginning of the Trialogue on conflict minerals (the negotiations between the European Parliament, the European Commission and the 28 EU Member States that form the EU Council) CIDSE calls on EU Member States to take the issue of conflict minerals seriously, rather than pushing a position that puts profits before the people. The Council is currently opposing a mandatory law and pushing for a voluntary and partial system, which is not sufficient to solve conflict minerals and to ensure that electronic products don’t hide stories of suffering.

A new video (now also available in English) filmed at the Fungamwaka mine in the DRC reveals the working conditions of artisanal miners who extract the minerals that enter many daily life products such as laptops, smartphones and other electronic devices. The Fungamwaka mine is an example of a “clean mine”, where no rebel groups are present to illegally tax the miners, and child labor is banned. In a sector too often dominated by exploitations and human rights violations, this example demonstrates how the sector could be cleaned up under effective regulation. The costs of doing so cannot simply be passed on mine workers who are struggling to make a decent living, but should be covered by the companies sourcing these minerals along the full supply chain.

In a separate video message, Mgr. Fridolin Ambongo from the DRC says: “We wish wholeheartedly that the position of EU Member States will evolve towards a binding regulation, because in my eyes a law which is not binding is not law.” According to Mgr. Ambongo the EU Member States are more sensitive to certain business arguments, and less to the humanitarian dimension and the moral and ethical aspects of mineral exploitation. Mgr. Ambongo points out that the lack of a proper legislation on conflict minerals poses a problem for consumers: “Using a product, without knowing where it came from, with the risk that it might come from a conflict affected area and contain “blood minerals”, can create a problem of conscience for many European citizens.”

In the policy briefing attached (available in English, Italian and French), CIDSE recommends that Member States revisit their positions and:
1. Show leadership on this issue by supporting mandatory due diligence requirements along the entire supply chain.
2. Support a Regulation that aligns with the OECD Due Diligence Guidance on Conflict Minerals, by:
• Ensuring that all due diligence obligations are consistent with the OECD standards
• Engaging companies downstream of metal importers, in particular companies that place products containing covered minerals on the EU market
• Including language that reflects the flexible and progressive nature of due diligence.

Background on the conflict minerals regulation:
In the absence of a strong regulatory system, European citizens cannot be sure that the products they buy and use daily didn’t involve human rights violations. To tackle this issue, the European Commission proposed the “conflict minerals” regulation in March 2014. The proposal was disappointing in many ways: it consisted in a self-certification system that companies could voluntarily join, and it only applied to 19 smelters and refiners based in the EU (while not covering all products entering the EU market that contain the targeted minerals). In May 2015, the European Parliament (EP) strengthened the proposal by requiring all European companies manufacturing or importing components and final products containing the targeted minerals to check their supply chains to make sure they don’t fuel conflicts or participate in human rights violations. Even if some gaps still remain, CIDSE welcomed this vote as a great evolution.

A message from Pope Francis:
In a public message sent to leaders of communities affected by mining in July 2015, Pope Francis highlights the shared responsibility of governments, citizens and businesswomen and men to act in order to bring the needed change: “The entire mining sector is decisively called to effect a radical paradigm shift to improve the situation in many countries. To this change a contribution can be made by the governments of the home countries of multinational companies and of those in which they operate, by businesses and investors, by the local authorities who oversee mining operations, by workers and their representatives, by international supply chains with their various intermediaries and those who operate in the markets of these materials, and by the consumers of goods for whose production the minerals are required. All these people are called upon to adopt conduct inspired by the fact that we constitute a single human family, “that everything is interconnected, and that genuine care for our own lives and our relationships with nature is inseparable from fraternity, justice and faithfulness to others”.

CIDSE has coordinated a statement signed by nearly 150 Church leaders from 38 countries on 5 continents, asking for strong regulation to achieve the objective of breaking the link between natural resources and conflicts.
Other CIDSE’s resources on conflict minerals are available.