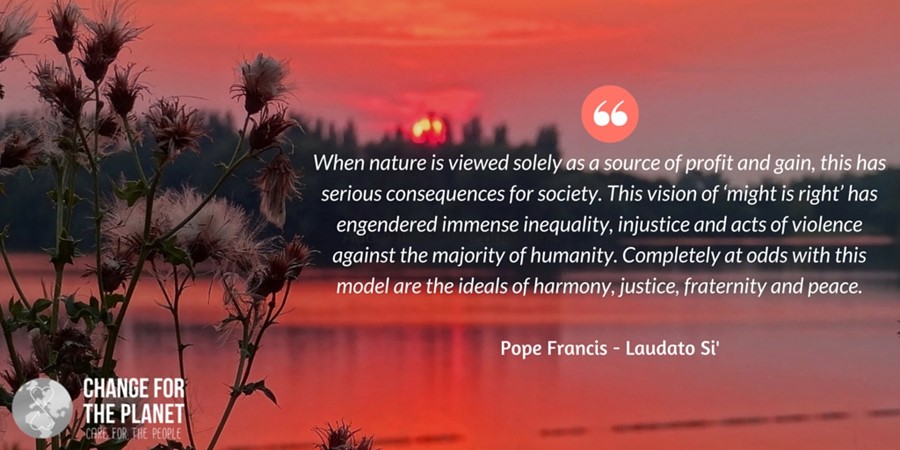 CIDSE reflects on the impacts of the Encyclical on the major political processes that marked 2015 and launches a series of high-level video interviews on Laudato Si’. CIDSE’s campaign “Change for the Planet- Care for the People” responds to the Laudato Si’ call for people to act for environmental and social justice.

2015 was a major political year at the global level: the timing of the Encyclical Laudato Si’, launched in June 2015, was therefore relevant as it addressed an urgent call to policy-makers, communities and movements, and people of all faiths and ages to act decidedly and genuinely for climate and social justice. It gave a common ground for faith communities around the world to unite around a call to action on climate change and justice for the world’s most vulnerable communities, and to put pressure on decision-makers to raise their commitments towards COP21. The momentum created by the Encyclical also brought together civil society and social movements that advocated strongly for a profound transformation in our ways of living. “The Encyclical has been a solid and constant reference point, which forced all people, from civil society to grassroots movements to high level politicians, to reconsider positions against a higher moral standard” said Bernd Nilles, CIDSE Secretary General.

The Encyclical inspired people from different walks of life and corners of the planet; CIDSE documents the views of a climate activist, a politician and a climate scientist in three interviews.

• Patrizia Toia, Italian Member of the European Parliament for the Socialists and Democrats Group (S&D) emphasizes on the relevance of the concept of “ecological conversion”, which is fundamental as it implies not only the care for the environment, but also “of the people living within our common home”. She also recalls the Pope’s call for an open Europe, one that is able to bring down walls, addressing particularly the arrival of the refugees and Europe’s moral responsibility in being welcoming.
Watch her video here

• Professor Jean Pascal van Ypersele, from the Université Catholique de Louvain, Belgium and former Vice Chair of the IPCC speaks of the complementarity between the science and the values at the heart of the Encyclical. He said “The IPCC have to be objective and rigorous, but cannot be policy prescriptive, they cannot be based on value choices […] . What the Encyclical does is going one step further, because of course it’s based on the Christian values, and that’s something the IPCC cannot do, so it’s very much complementary.”
Watch his video here

One year of Laudato Si’ provides CIDSE also with the opportunity to launch the second year of its campaign “Change for the Planet – Care for the People”, which echoes the Encyclical’s call for a radical change in people’s lifestyles towards more sustainable ways of living that secure dignity and well-being within planetary boundaries. Join the conversation online by following the campaign on Facebook and Twitter, through the hashtags #Change4Planet and #LiveLaudatoSi!