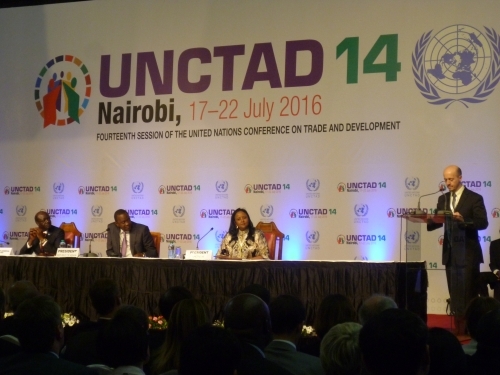 Aldo Caliari of Center of Concern, CIDSE’s US member and Director of the Rethinking Bretton Woods Project, reports on the outcomes of the UNCTAD 14 conference (Nairobi/Kenya, 17-22 July 2016).

In the run up to the conference, CIDSE was one of the 331 worldwide civil society organisations signatories of a letter to UNCTAD member states calling for the reaffirming and strengthening of UNCTAD’s development mandate. (see link at the bottom of this message).

Due to its decidedly pro-South and development-focused mission, UNCTAD’s conferences have traditionally been North –South showdowns. Coming a few months after the adoption of the ambitious and universal 2030 Agenda for Sustainable Development and its 17 associated goals, the theme of the XIV Quadrennial Conference of UNCTAD (the United Nations Conference on Trade and Development) was “From Decisions to Actions.” There was, therefore, reason to expect that this time members would bridge their differences for the sake of reinforce mandates of the organization critical to the Agenda’s implementation. But that was not the case, and the dynamics were a lot more akin to the difficult ones witnessed in the inaugural Financing for Development (FFD) Forum last April.

The conference, held from July 17 through 22, 2016, in the city of Nairobi (Kenya), adopted by consensus the Nairobi “Maafikiano” –word that in Swahili means Outcome (“the Outcome”).

At the beginning of the conference, more than 400 civil society organizations united to make a case for strengthening the mandates of UNCTAD so it could more effectively and adequately support developing countries in their quest for structural transformation. “The organization’s foundational vision,” they said, “is as critical today as it was 50 years ago, when it was established as a platform for thought and action on broad issues of trade and development explicitly formulated around the challenges and perspectives of the vulnerable and marginalized majority of nations within the international system, and the people in them for systemic change.”

The statement underscored that everybody could share in the gains of strengthening the one international organization that was able to spot the last global financial crisis before it happened, and that pushed issues such as inequality and sovereign debt restructuring onto the international development agenda. It is also in everybody’s interest that developing countries be on a better footing to face their development challenges and make their contribution to the global pledge of achieving the Sustainable Development Goals by 2030.

Civil society also called for reinforcing UNCTAD’s role in analyzing “the compatibility of a range of investment, trade, debt, macroeconomic and financial policies that, without proper checking, risk undermining efforts to achieve the Sustainable Development Goals.”

But even the simplest things became heroic achievements in the context of the tough negotiations. This was the case with, for instance, repeating the commitment achieved last year in the Addis Ababa Action Agenda, that “UNCTAD’s important role will be strengthened as the focal point in the United Nations for the integrated treatment of trade and development and interrelated issues in the areas of finance, technology, investment and sustainable development.”

Furthermore, such agreement is captured in only a narrative section. Since the UNCTAD XII Conference, in Accra (2008), UNCTAD conference outcomes feature two sections, one on narrative and one on UNCTAD’s mandates. Only the latter spells out what UNCTAD actually will be able to do to address the issues raised in the former — even if the narrative, of course, is an important interpretative element. Looking at the commitment to strengthen UNCTAD in the light of the actual mandates it has received, it is hard to argue any such strengthening has happened.

Against such backdrop, civil society organizations had reason to celebrate commitments to merely continue important work that UNCTAD had been performing so far. Importantly, UNCTAD secured critical mandates to continue performing analysis and research on trends in the international financial system, including the faultlines exposed by the global financial crisis. It will be able to continue “its research and analysis on prospects and impacts of global economic trends,” “work on the linkages between international trade, financial and macroeconomic issues,” and “identify specific needs and measures arising from the interdependence between trade, finance, investment, technology and macroeconomic policies.“

The organization will also be able to continue work on South-South cooperation and integration, as well as regional mechanisms to facilitate the mobilization of financial resources for inclusive and sustainable development.

UNCTAD’s debt work, in particular, was a target given the role of the organization promoting alternatives on sovereign debt restructuring and responsible lending and borrowing that often had not sit well with Northern creditors. But concerted campaigning by a worldwide network of debt organizations – which gathered to strategize in advance of the conference – ultimately succeeded. The Outcome asks UNCTAD to “Continue its analytical and policy work and technical assistance on debt issues, . . . and to promote policies for responsible sovereign borrowing and lending, complementing the work done by the World Bank and the IMF and other stakeholders as appropriate.”

The pledge to establish two new Inter-Governmental Expert Groups should not be minimized, even though it was the only possible deal after several new Inter-Governmental Expert Groups were initially proposed in the negotiating draft. One of them will be on Financing for Development “as reflected in the Addis Ababa Action Agenda and UNCTAD’s work,” a topic of interest of developing countries, and the other on “E-Commerce and the Digital Economy” – which developed countries wanted. Even this limited agreement came with the condition that it should be fulfilled from within existing resources. This means “resources and time allocations of the existing expert group meetings and the two Commissions” will have to be redirected to that purpose.

However, as lamented by civil society in their concluding remarks, delivered at the closing ceremony, the conference missed the opportunity to give UNCTAD more tools on other issues that would have been critical to developing countries’ ability to meet development goals and transform their economies.

Perhaps the highest-profile struggle took place on tax issues, where the debate reproduced the divisions already witnessed at the Third Financing for Development Conference. As it happened last year around this time in Addis Ababa, this year in Nairobi developing countries call for more democratic participation in the design of tax cooperation rules was defeated by developed countries, who prefer to maintain the OECD – where only rich countries are members – as the forum for that purpose. Proposals to have an intergovernmental expert body at UNCTAD, or even lower-profile proposals to enable UNCTAD to engage in tax policy, were defeated, too. Conspicuously, in a sentence that would have called on UNCTAD to support developing countries participation “on an equal footing,” this latter expression was objected by developed countries. In the end, the Outcome only provided a narrow mandate for UNCTAD to “continue its work on taxation as it relates to investment policy.”

Also continuing on the trends already visible in Addis Ababa last year, private sector financing ideas took center stage. In their declaration, civil society organizations called for caution in the promotion of Public-Private Partnerships (PPPs), and reminded about the lack of proof that they were delivering positive economic, social and environmental outcomes. “Where unavoidable,” they said, PPPs “should be subjected to rigorous standards and criteria on transparency, feasibility, auditing, social and environmental safeguards, the affordability, accessibility and quality of the services and sustainable infrastructure that they are expected to deliver, the prevention of unsustainable debt burdens and the consent and participation of people and communities that will be impacted by public-private partnership projects.”

Unfortunately, such calls were neglected in the final language, which upholds acritical support for Public-Private Partnerships, with a vague reference to the “policy challenges” they face and a weakly-worded call for “guiding principles” to deal with them. A mandate for UNCTAD to play a meaningful role in such development is nowhere to be found in the document. To add insult to injury, the UN Economic Commission for Europe cosponsored a side-event to promote its “People first PPPs,” an initiative by which, as denounced by scores of civil society groups, the regional body with membership limited to European countries has given to itself the role of developer of global standards on the matter.

On global value chains, only with a lot of goodwill could one read in the Outcome a mandate to address the chains’ governance and the distribution of gains across them. The document requests UNCTAD to “undertake research and analysis and provide technical assistance on the changing international trade landscape, including identifying means of stimulating economic diversification, reducing trade costs, promoting value-added production, including in global value chains for goods and services, while addressing transparency, social and environmental responsibility and their potential development impacts.”

Given the growing momentum around rethinking of international investment agreements and their dispute settlement mechanisms, developing countries could have used a bolder mandate for UNCTAD to support the many countries embarked in reviewing such agreements. The Outcome only refers to UNCTAD continuing “its existing programme of meetings and consultations with member States on investment agreements in accordance with the Addis Ababa Action Agenda, maintaining its role as a forum for international discussion on investment agreements, and assist member States in their efforts to strengthen the development dimension, as appropriate.” UNCTAD should also continue to “build a better understanding of investment issues and investment policies that promote development, and promote a better understanding of issues related to international investment agreements and their development dimension.”
According to one of the narrative paragraphs in the Outcome, “for the effective implementation of the 2030 Agenda, it is important that relevant international agreements, rules, and standards are . . . consistent with and support, progress towards the Sustainable Development Goals.” The failure to strengthen an institution greatly positioned to do just that, will be sorely felt.

This article was first published on Center of Concern’s website.