Marrakech: the COP of (in)action? – CIDSE
Skip to content 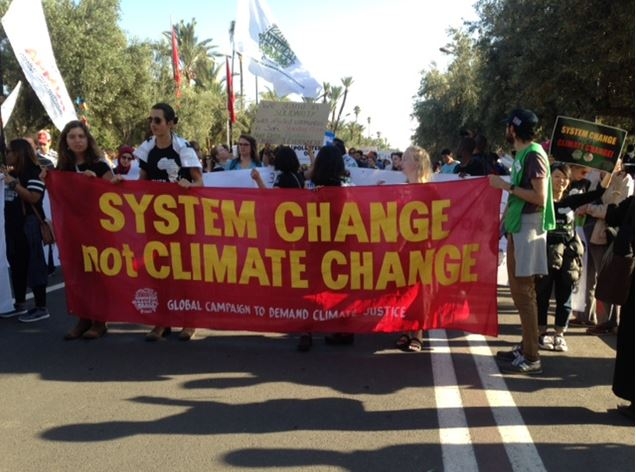 This year’s two-week global summit has been described as the ‘COP of action’ or an ‘implementation COP’, with the intent to flesh out matters not only concerning the implementation of the Paris Agreement, but also on other sticky issues, such as climate finance and agriculture.

It is once again that period of the year when governments, businesses and NGOs meet to discuss how the world plans to face the biggest challenge of our times: climate change. This round of the 22nd Conference of the Parties (COP22) of the United Framework Convention on Climate Change (UNFCCC) comes after less than one year since the first international climate deal, known as the “Paris Agreement” was sealed, and right after its official early entry into force on November 4th, 2016. This year’s two-week global summit has been described as the ‘COP of action’ or an ‘implementation COP’, with the intent to flesh out matters not only concerning the implementation of the Paris Agreement, but also on other sticky issues, such as climate finance and agriculture. COP22 should also look at how the Nationally Determined Contributions (NDCs) can be further enhanced in order to meet the temperature goal of below 1.5 °C and close the mitigation gap.

When arriving to the charming city of Marrakech, it’s clear how the Moroccan Presidency wanted to show world governments how the country is projecting its future towards a low-carbon and resilient economy. Yet, it is also important to keep in mind that all that glitters isn’t always gold! On a hilltop in the Atlas Mountains, people’s resistance has taken place over the past 2 years to protest a mining company’s expropriation of precious water supplies, as well as the pollution that results from the mining[1]. 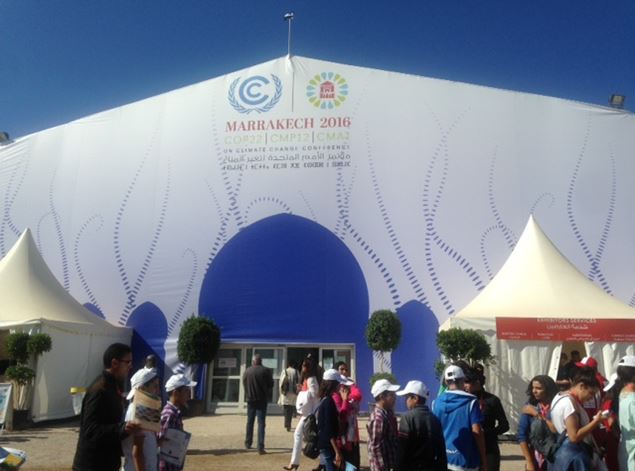 Last week the negotiations continued the work of the APA (Ad-Hoc working group on the Paris Agreement) as well as of the other work-streams (SBSTA and SBI), but it clearly showed that the road is not easy: as the agreement will ultimately be translated into national level actions, there are huge differences in views between focusing on reducing emissions (mitigation) and actions intended to adapt to the impacts of climate change. This divide was the main reason for the stall last week in agriculture negotiations; common ground couldn’t be found and countries decided to postpone the talks to next year. This is a quite upsetting outcome as that more than 800 million people in the world are food insecure.

What really shook the moods of every participant in the corridors of the COP22 venue was the U.S. election outcome: will the US pull out from the Paris Agreement and/or the UNFCCC? Will the US put an end on all commitments made? This anxiety dominated this COP even though countries keep reiterating that we need to act together to show solidarity and that no U turn can be made by any countries.

Last weekend an estimated 4,000 people took to the streets of Morocco, calling for meaningful action. Representatives of indigenous peoples, rural communities, workers, youth, women, and others from local and international organizations were united under the slogan of system change for climate justice. Many partners and allies of CIDSE and its members were present and it was purely empowering to march together with the Rural Women’s Assembly from South Africa. The Moroccan Civil Society Coalition renamed this COP as ‘COPAfrica’ not only for geographical reasons but mostly because African countries are the ones which will suffer the most from global warming and therefore urgent action and mobilization of finance for adaptation is needed as promptly as possible. Many vibrant activities organized by civil society groups, social and grassroots movements are taking place beyond the official space set up by the UNFCCC, inspiring several questions to reflect on and take back home! 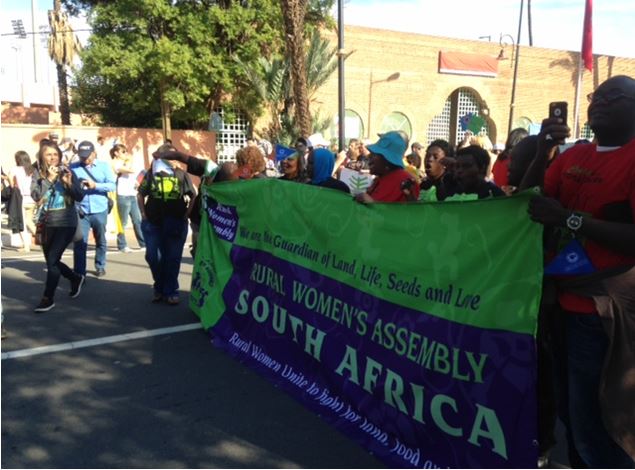 On Tuesday 15th November, heads of states and ministers from about 196 countries flew in to Morocco for the high-level segment of the talks. A draft document titled ‘Marrakech Call for Climate Action and Sustainable Development’ was given out by the Moroccan COP Presidency to some country delegations on Friday, November 11th. The leaked document was not received well by developing countries due to lack of transparency and inclusiveness but also because it undermines the UNFCCC and the very principles it was founded on: ‘Common but differentiated responsibilities and respective capabilities’. Therefore if this draft document gets adopted it will seriously set back whatever aspiration is embodied in the Paris Agreement.

It is still to be seen how the last days of COP22 will unfold – but, certainly, movements gathered here in Marrakech are committed to continue their resistance, boldly and united.

For more information about CIDSE’s activities at COP22, visit our section.