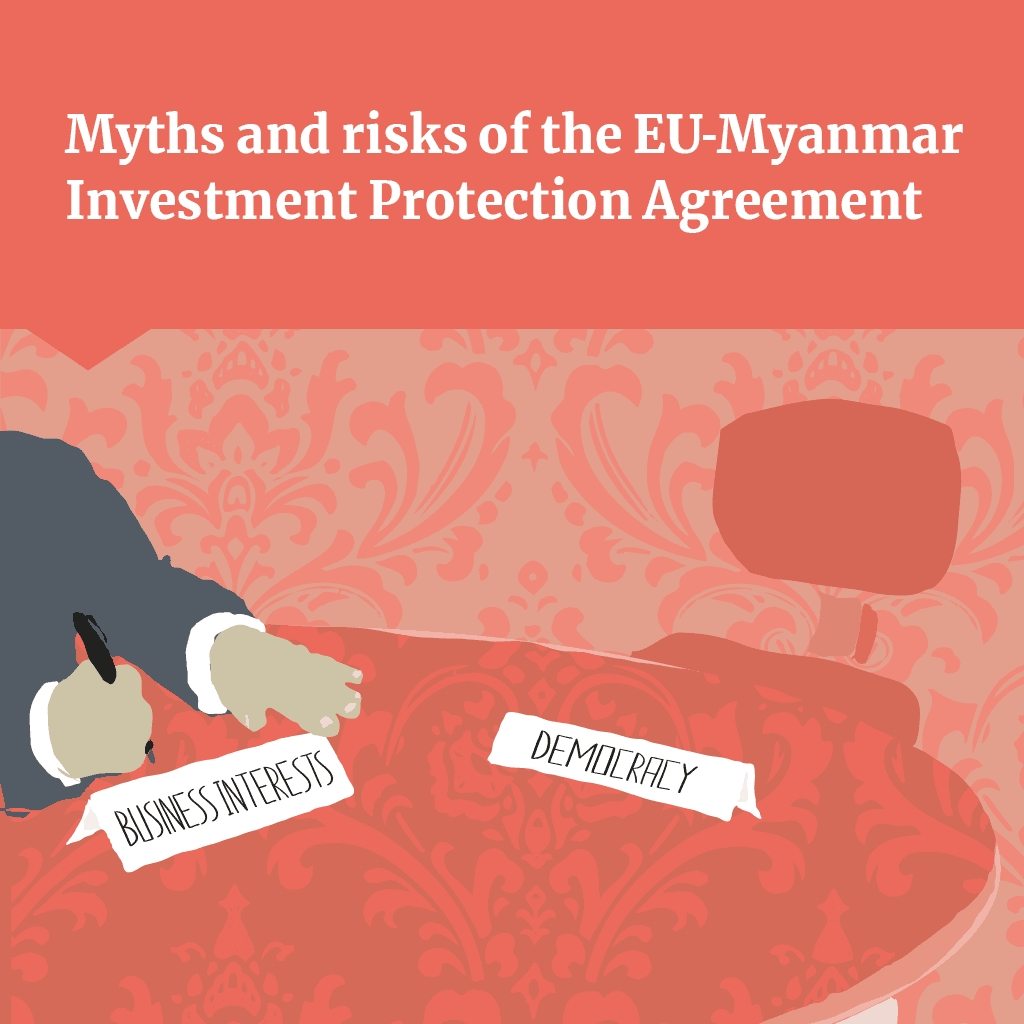 The EU-Myanmar Investment Protection Agreement (IPA) could have serious consequences for the country’s already grave human rights situation, warn organisations and networks in the EU, Myanmar and ASEAN (1). The IPA’s risks have been seriously underestimated and its benefits overstated, with dangerous implications for Myanmar’s peace efforts, human rights, and democratic development, according to the report Myths and risks of the EU-Myanmar Investment Protection Agreement (2).

Myanmar’s human rights situation has become the subject of international scrutiny. In mid-September, a delegation of the Trade Committee of the European Parliament canceled its visit to Myanmar (3) due to ongoing human rights violations against the Muslim community in Rakhine state, who self-identify as Rohingya.

In other parts of Myanmar, military offensives by the national army in Kachin and Shan states continue, displacing hundreds of thousands. Land-grabbing and natural resource exploitation are endemic in many parts of the country, feeding the ethnic conflicts.

Myanmar is far from a democratic and peaceful country. Achieving a lasting peace means moving towards a more federal system and the introduction of many new policies and laws, which could be drastically hindered by this IPA.

The IPA, negotiated largely behind closed doors, would allow European investors in Myanmar to sue the government at an international tribunal if new regulations that aim to favour people or the environment, such as land reforms, affect their profits.

“Our local partner organisations are working on complex land problems in ethnic areas with overlapping administrations and large numbers of internally displaced people facing situations of grave food and land insecurity. The EU can best support the peace process by ensuring that Myanmar maintains full policy space for reforms, rather than causing the lock-in of current policies,” said Denise Auclair, senior advisor at CIDSE.

Most of the foreign direct investments are in conflict areas and sectors with high records of human rights violations, such as energy and mining. The environment of conflict, lack of appropriate legal framework and poor access to judicial remedy in Myanmar make it likely that under this IPA, European companies could increasingly become complicit in human rights abuses. To avoid such a scenario, the EU and its Member States should oblige their companies by law to respect human rights in their operations abroad.

The report (available in English and French) concludes with a series of recommendations that aim to encourage and strengthen much-needed public debate in the EU and in Myanmar, including parliamentarians and civil society, before the IPA negotiations conclude.

2 Myths and risks of the EU-Myanmar Investment Protection Agreement is available to download at https://www.tni.org/en/publication/myths-and-risks-of-the-eu-myanmar-investment-protection-agreement