What’s the place of transition in the Christian message? – CIDSE
Skip to content

In Fastenopfer, the Swiss Lenten Fund in Switzerland, our Lenten campaign this year is inspired by Pope Francis’ call for an “ecological conversion” in the encyclical “Laudato Si.’” It calls for an inner conversion: the realization that we are one with all of humanity and nature. Through our Lenten campaign, we want to build a movement of people inspired by this call who will actively contribute to build a world where everyone has enough to live.

The words “change” and “transformation” are in vogue these days. French President Macron talks of the transformation of the French economy by liberalizing social regulation. In his book “India transformed”, Rakesh Mohan describes the benefits of 25 years of neoliberalism for India. It would make you question the choice of “transformation” as the theme of a Lenten campaign!

Noting the remarkable progress made to eradicate extreme poverty and illiteracy in the last few decades, the famous America environmental advocate Gus Speth said “We have won several battles but we are about to lose the planet.” His words describe the challenge we face to tackle what the NGO “Smart CSOs” calls the “systems-wide crisis with its multiple dimensions.” Climate change, floods, drought and biodiversity loss are symptoms of the ecological crisis as much as inequality reflects an economic and social crisis. The International NGO Oxfam calculated that the wealth of 1% of the world’s population consisting of the richest surpasses the wealth collectively owned by the remaining 99%. Work pressure, stress and overwork also reflect a spiritual crisis. Nobody can ignore the immense problem we face with psychological disease in our age. We see a crisis of democracy: on the one hand a growing apathy for politics and, on the other, growing nationalism. Responding to the “systems-wide” crisis calls for profound transformation.

Karl Polanyi coined the concept of “great transformation” in his book with the same title published in 1940. He used the concept to describe the upheavals caused by the Industrial Revolution on Western society at the end of the nineteenth century and the beginning of the twentieth century. Over six decades later, the American-Swedish institute Global Scenario Group used the word “Great transition” to put forward a vision of a society of peace and solidarity. The Transition town movement emerged in 2006 based on the notion of self-sufficiency. In 2011, the scientific advisory body of the German Federal Government published a study on environmental policy reform at the global level « Welt im Wandel – Gesellschaftsvertrag für eine Grosse Transformation » (Global Transition- a social contract for a great transformation). It was only a small step to the UN General Assembly that met on 25 September 2015 on the theme “Transforming our world.” It adopted “Agenda 2030” based on the Sustainable Development Goals (SDGs). This is an agenda full of noble ambitions but not free of contradiction.

This brief history shows how the concept of transition has evolved from its original coinage by Polany to the SDGs. It continues to evolve today. This history would be incomplete without one common thread: the role of faith. The Churches have constant raised the alarm bells about the existence of a multiple crises throughout this period. From the Ecumenical Assembly for Justice, Peace and the Integrity of Creation (1983-89), the declaration of the Ecumenical Council of Churches on climate change (Busan 2013), and especially the Encyclical of Pope Francis (2015). Even before the SDGs announcement, the Pope had already indicated in “Laudato Si’” that ecology and efforts to eradicate poverty are equally important. There have always been close linkages between Christian messages and the great transition.

The great transition represents advancing strategies of civil society to address interlinked global crises, from climate change to famine. Often efforts only tackle the symptoms. It is essential to focus on the root causes of the problem, based on the concept of “buen vivir”, a good life for all.

Smart CSOs has developed a change model made up of three levels: a) culture and values (“culture”), b) political, social, economic institutions (“regimes”) and c) leverage points or the “seeds of the new economy” (“niches”). It demonstrates that transformation does not need to start from scratch It is already taking place. The film “Demain- Solutions exist all over the world” presents dozens of initiatives promoting sustainable development and solidarity that deserve to be multiplied. At the level of “regimes”, we see efforts to increase energy and resource efficiency in the economy. At the same time, such efficiency gains risk being undermined by incentives that reinforce unsustainable consumption and mobility patterns. The great transition therefore requires a focus on the mainstream narrative. It requires moving from a narrative of consumption-fuelled economic growth to more sobriety, more equity and more inclusion. 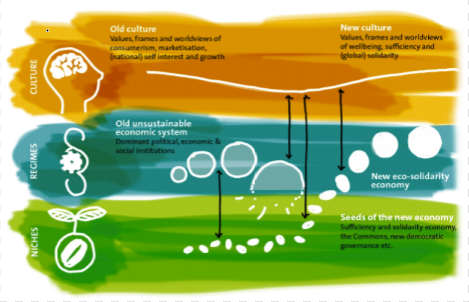 By embodying and disseminating these values, NGOs and Church-whether in the global north or south- play an important role in the great transition. Two months ago, I had the opportunity to visit Fastenopfer’s partners in India that work together with around 120,000 Adivasis and Dalits. In the Indian state of Assam, rice and cereal bank ensure food security for these communities throughout the year. When there is a bad harvest, they are not forced into debt thanks to these banks. Advocacy towards the current “regimes” that our partner organisations undertake to enforce Dalit rights, aim to increase their access to land, safe drinking water and education. In recent years, Adivasis have even become members of the “regimes” (local councils) in their villages, enabling disenfranchised groups to access power. The mainstream narrative in India focuses exclusively on GDP growth fuelled by nationalist sentiments favouring the Hindu culture. Responding to this, the Adivasi struggle celebrates their contribution to prosperity in Indian society: their culture, their animist rites. Their struggle very powerfully brought home to me the many facets of the great transition.

By Daniel Wiederkehr, transition adviser at the Lenten Fund