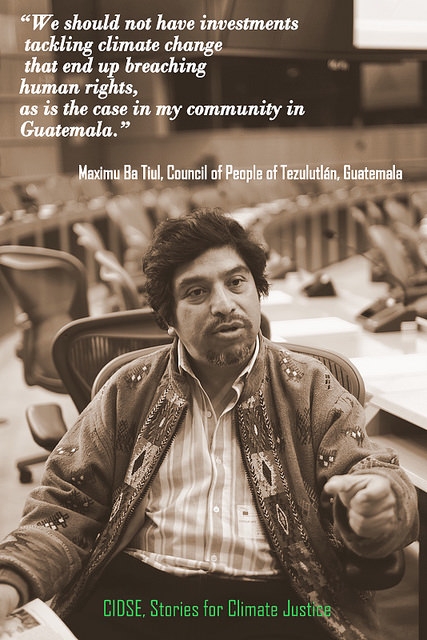 Climate change is perhaps one of the most important human rights challenges of our time as it poses a direct threat to life, health, food, clean water and energy access, and will be the cause of displacement for many communities, even countries, around the world. As the UN Human Rights Council observes, “Climate change poses an immediate and far reaching threat to people and communities around the world and has adverse implications for the full enjoyment of human rights.”(1)

Although climate change affects humanity and the planet as a whole, it has a disproportionate impact on certain groups or communities, particularly those that are the most vulnerable, despite the fact that they are the least responsible for causing climate change. So, the more there are delays in mitigating climate change, particularly by the main emitter countries, the more the costs of adapting to the impacts increase, with higher risks of experiencing severe or irreversible loss and damage. Yet, current efforts to mitigate climate change, like carbon trading, or the push for ‘clean’ energy infrastructure projects in developing countries have been somewhat problematic, often having direct impacts on communities and ecosystems.

Maximu Ba Tiul, a representative of the Council of the People of Tezulutlán in Guatemala, explains how a hidroelectric infrastructure project – Santa Rita – in his country has destabilized both the communities that originally lived there, and the ecosystem of the region.There was no free, prior and informed consent of the potentially affected populations, bypassing, in-so-doing, international human rights standards. Displacement, intimidation and some episodes of violence were also reported by the communities. Maximu Ba Tiul attributes this behavior to the logic behind these projects, which, according to him, respond to an imperative of growth, rather than to the protection of the environment and the safeguard of the rights of the communities. “The deterioration of the environment”, he says, “is due to the construction of the concept of development, an economic model that has never respected human rights. It is the market against the people and nature.”

Guatemala is not the only example. This is a common trend accross different parts of Latin America, Africa and Asia. To tackle these negative effects, he suggests that there need to be simple concrete mechanisms that are able to guarantee the respect of human rights. States, the first responsible to safeguard the rights of their citizens, should commit to enforce the respect of human rights by national or foreign corporations working in their territory, and should regulate the use, exploration and exploitation activities of such corporations. In the case where these standards or regulations are infringed, states should be able to sanction their activities.

Today, communities accross Latin America have expressed their refusal to these sort of infrastructure and energy mega-projects, which have exhacerbated poverty, hunger, diseases, and particularly, the division of the communities themselves, their social fabric.

These will be crucial elements to address at the UN Climate Negotiations in Paris, which should reflect consistency in terms of social and environmental safeguards and the obligation to respect human rights, applied to any infrastructure or clean energy development project at every stage.

Learn more about CIDSE’s work on Business and Human Rights and Extractives in Latin America here.