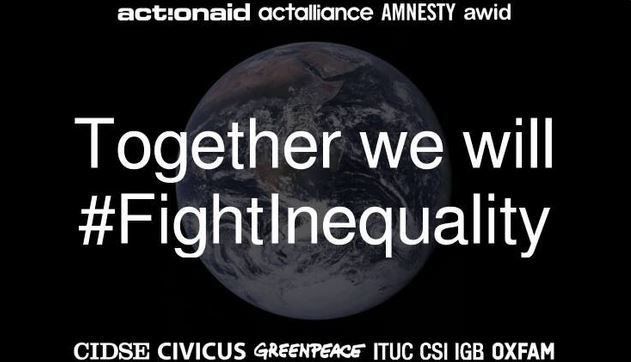 As the world’s rich and powerful gather in Davos for the World Economic Forum an alliance of top international charities, human rights campaigners, women’s rights groups, green groups, civil society organisations and trade unions has come together to fight the growing crisis of inequality.

The alliance statement says ‘“Struggles for a better world are all threatened by the inequality crisis that is spiralling out of control. Across the world, we are seeing the gap between the richest and the rest reach extremes not seen in a century.’

Bringing together powerful global networks and campaigning capacity, the organisations are committed to working together to fight for changes to tackle inequality globally and in countries across the world, and to reach out to others to build a global movement to counter balance the power and influence of the 1%.

“Extreme inequality is also frequently linked to rising restrictions on civic space and democratic rights. The right to peaceful protest and the ability of citizens to challenge the prevailing economic discourse is being curtailed almost everywhere.

“Even the future of our planet is dependent on ending this great divide, with the carbon consumption of the 1% as much as 175 times that of the poorest.

“We choose to imagine a better world than this, where everyone’s human rights are respected, protected and fulfilled. We believe humanity has the talent, technology, and brilliance to build that better world, where the interests of the majority are put first. And we believe the time has come to fight for it together.”