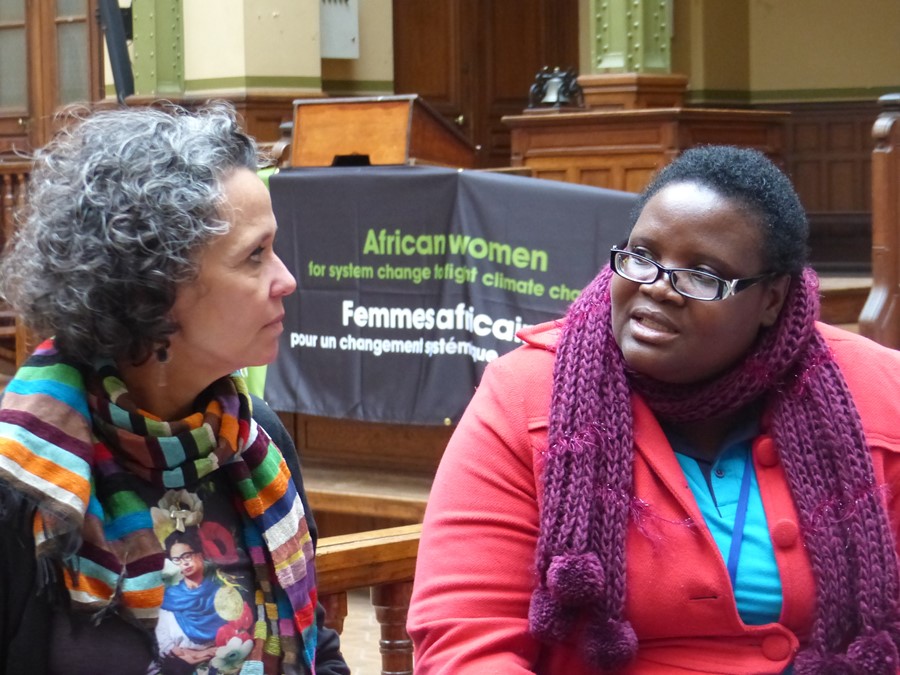 Every month partners, members, staff and inspiring thinkers will share their thoughts on gender equality, drawing on their experiences and struggles. The first blog entry will appear on the 8th of March on the occasion of International Women’s Day. Your feedback is welcome and can be sent to pavarotti(at)cidse.org

Gender equality: We still have a long way to go…

As an international family of Catholic social justice agencies, our goal is to achieve global justice. Gender equality is central to the achievement of this goal. It is a matter of urgency and priority.

“We must address the class and gender issues within the climate narrative. We must express our anger” observed Doty, a woman from the Philippines. Speaking at a meeting organized by the South African Rural Women’s Assembly on the sidelines of the Summit to reach a new international climate agreement (the 21st meeting of the Conference of Parties to the UN Framework Convention on Climate Change or COP 21) in Paris in December 2015, she said: “I’ve been observing COPs since Bali. We talked about equality and trust. How can you trust a process when previous principles are put aside?”

In our work with partners and communities around the world, we know that the gender dimension cuts historical, cultural and institutional causes of injustice that perpetuate poverty. We have prioritized gender equality as a cross-cutting issue in our work since 2005. The first meeting on ‘women in development’ in CIDSE dates back to 1994, during the preparation of the Beijing World Conference on Women in 1995. The meeting concluded that gender was hardly addressed in CIDSE’s work and recommended a number of ways that we could advance gender equality in our political work and organizationally. 15 years on, a study to review gender mainstreaming in CIDSE in 2009, revealed that while there was some recent progress, it is still not done in a systematic way. To make more substantial and systematic progress, our work on gender needs to be more operational and set specific goals, based on a shared understanding of the relevance of the gender issue to our work.

Whether we consider the number of women in leadership positions in the CIDSE family or the extent to which we prioritise gender equality in our policies and strategies, we realize that we still have a long way to go….

We therefore hope that this blog series will be a way to spark reflections on gender equality across the spectrum of CIDSE’s activities through a plurality of voices.

Gender equality in CIDSE: we have made some progress!

While still much needs to be done, CIDSE has made many efforts to mainstream and prioritise gender equality in our work. Our members Cordaid in the Netherlands, CAFOD in England and Wales and Trócaire in Ireland have been very vocal and active around gender equality for years. Cordaid has published papers on gender equality in relation to the New Deal, the Millennium Development Goals, and the conditions in conflict-affected areas. CAFOD has tackled gender equality in relation to issues such as the HIV epidemic and gender violence. Trócaire is running programmes for women’s empowerment advocating for laws that protect women and respect their rights and dignity.
Experience has pointed to the importance of clarifying our understanding and definition of the concept of gender equality. CIDSE’s discussion paper, “Gender Equality: CIDSE’s Understanding and Definition. Standing for the equal dignity of men and women.” explains our understanding of the concept of “gender” and “gender equality.” It is inspired by Catholic Social Teaching, rooted in the principle of the dignity of all human beings. Implicit in this principle is the requirement that men and women have the opportunity to fully exercise all their human rights.

Our understanding of gender equality is based on our members’ approaches, strategies and policies. Working in the international and multilateral sphere in alliance with other development organisations, both faith-based and secular, we also share and support language and definitions used in the international arena.

The discussion paper also documents examples of efforts in the Catholic Church and organizations to promote gender equality and identifies what still needs to be undertaken. In the Apostolic Exhortation Evangelii Gaudium, Pope Francis emphasizes that “demands that the legitimate rights of women be respected, based on the firm conviction that men and women are equal in dignity, present the Church with profound and challenging questions which cannot be lightly evaded” (No.104).

We intend to use this paper to fuel discussion and as a source of inspiration to ourselves as well as to the Church’s leadership in responding to these questions.