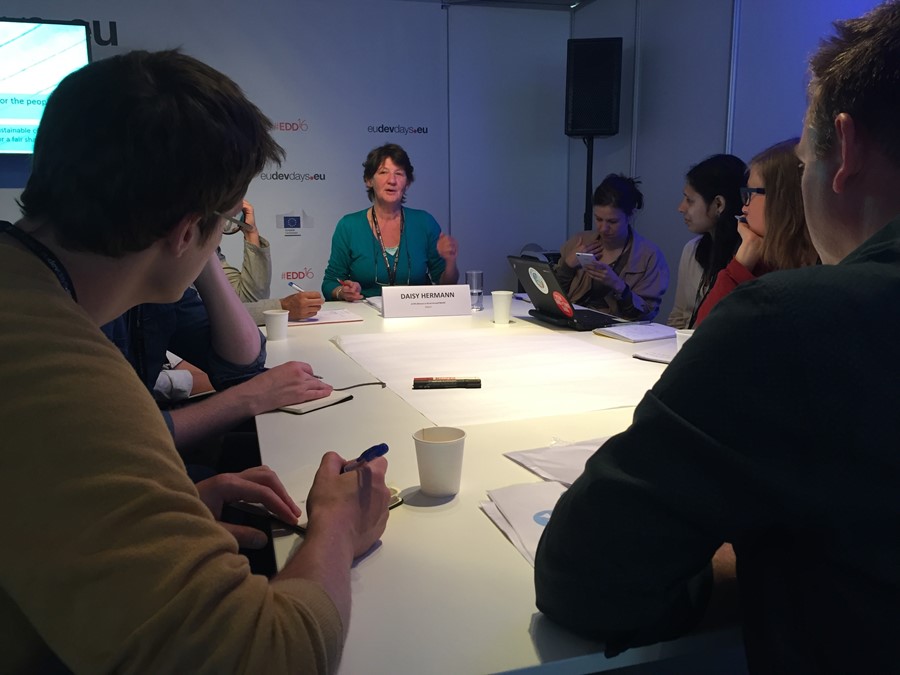 In light of the mayor processes that occurred at the global level in 2015, with the adoption of the Agenda 2030 and the Paris Agreement, we have the opportunity and the responsibility to continue to put pressure on our governments to implement the agreements and take action. The increasingly tangible effects of climate change in our daily lives and especially on the most vulnerable, as recent reports have shown, reminds us that there is no time to lose and we need to act now at all levels.

In this context, the lab session gathered speakers from diverse backgrounds, organisations, and movements in an interactive space that invited an active participation and exchange of ideas from the participants. The aim is to further our reflection on the fundamental shift we need to make in order to ensure a just and environmentally conscious society. In this way, the experiences presented propose fundamental questions and alternatives as to the changes that are needed in the ways we produce and consume to enhance more sustainable ways of living.
From the small-scale farmers struggle for a sustainable agriculture to ensuring local, organic, healthy food in schools, from the importance of transforming the way we consume to reduce waste, to exploring the role of local governments in promoting alternative choices of consumption, these were some of the experiences explored by the speakers, which hint at the work that needs to be done at different levels to help develop a policy landscape that is ideal for sustainable ways of consumption and production in our economies and societies. The experiences also highlighted the various ways in which citizens can get involved to bring about change for the people and the planet.

• Irmi Salzer from an Austrian member of La Via Campesina, shared her experience on the Nyeleni movement, a local, regional and global movement that attempts to introduce the principles of food sovereignty at all levels. The Nyeleni movement seeks a change in the political and corporate framework that controls our food system by allowing citizens and producers to regain control over it. The movement also strives for a change in the way food is produced and consumed today, while aiming at a transformation in the social conditions of small-scale peasant farmers and workers in the food chain. This, she says, also comes from a profound change in our mindset in relation to the commons, the way we perceive and manage water, land, soil, seed, and which are essential for life. Citizens are therefore called to take responsibility about the environment and their communities.

“Everyone has to eat. Everyone must therefore be part of this food and agriculture system in terms of being able to decide – co-decide – with other citizens and producers what the [food] system should look like”. – Irmi Salzer, Via Campesina, Austria.

• Roberto Sensi is Right to Food Policy Officer at Action Aid Italy. He presented the campaign “Io mangio giusto!” (I eat right) which aims to promote a sustainable food system by orienting the demand for food of Italian schools towards more sustainable, local, healthy food. In addition, it seeks to reduce food waste in schools, to promote education on sustainable food with children and parents and to improve the participation of citizens in the food system. With this in mind, the campaign also engages in advocacy work towards local authorities to help shape the food procurement system. Moreover, enhanced participation of citizens is developed by putting in place a catering committee at the municipality and school level, which gathers students, parents, nutritionists, among other, to discuss and give constant feedback in order to shape the schools’ food program.

• Wouter Boesman is Policy Advisor at PLATAFORMA, the European voice of local and regional authorities for development. He presented the experience of the city of Ghent, where he worked for over ten years, in its endeavor to help local businesses and the local economy to increase the demand and supply of sustainable, fair trade products, mainly clothing. The idea was to involve local businesses and suppliers to integrate ethical principles in their sourcing and procurements so that fair trade could become an essential part of the local economic reality. The municipality was highly involved by assisting them with expertise and advice on alternative sourcing, among other. To spark a mind shift among citizens, the municipality of Ghent also organized a sustainable fashion fair which gathered several interested people. This proved to be a very successful model to replicate in other cities. Wouter reminds that citizens have a very important role to play at the local level. Citizens are called to rethink the way they consume and what they consume.

“Citizens are not only consumers. Citizens are first and foremost part of a local community and a city. They need to talk to their city government and demand action in helping these alternatives thrive.” – Wouter Boesman, PLATAFORMA, Belgium.

• Anthony de Proft is a volunteer from Broederlijk Delen. He works as a lecturer on Waste Management and Environmental Legislation in Ghent. He speaks of an old yet useful model of waste management – the Lasinks Ladder, a basic principle that has guided the general European waste management scheme, but that, in other countries, it is not applied. In general, used products should be reused and serve as “food” for another product. This is the idea behind recycling. In the long run, however, Anthony recalls that we can and must rethink how we re-use and recycle using fewer raw materials, creating less waste and producing less greenhouse gasses. Everybody can easily use this concept, which is in fact a natural concept.

“In nature there is no waste, everything is used for the growth of something else. We just need to become more conscious of it.”– Anthony de Proft, Broederlijk Delen, Belgium.

• Daisy Hermann, from ACRF Femmes en Milieu Rural is from Belgium. Her movement is part of the larger movement regrouping many rural based adults (FIMARC) and working on promoting the rights of small-scale farmers, especially women. She shared their experience as part of the college of producers, a new body created by the Walloon agricultural minister in 2014 as part of the new agricultural code launched in 2013. The college is structured by pillars of production (livestock, grains…), representing the producers. Environmental civil society organisations and consumers are also represented in the new body, including the ACRF as a movement. It was a challenging experience at first, as ties of trust need to be created between all these different actors, but it was achieved through regular meetings. The process included a series of consultations with farmers and producers, and two studies collecting the voices of citizens and consumers in Wallonia. This allowed them to play a key intermediary role between consumers and producers.

These experiences remind us of the array of possibilities that are being advanced by people around the world, including social movements, citizens and civil society, policy makers, to change course and act on the issues that most affect society and the environment. It is why one of the focuses of our joint action campaign “Change for the Planet – Care for the People” highlights the importance of people-driven change. We believe that as citizens, we hold the key to bring about the change we need, and we can do it together with others.

In the course of the upcoming weeks we will publish video interviews with the representatives of these stories on the social media channels of the campaign “Change for the Planet – Care for the People”. Follow us to hear what they have to say about their alternative projects.