At the margin of the industrial food system, often exploited by new capital intensive means of production and rarely holding ownership of the land they work, peasant women are aware of the importance of demanding and taking control of sovereign food systems.

The precarious position of peasant women in the current food system has not prevented them from taking leadership in activism related to food and agriculture, rather it has motivated them to organize, develop and promote sustainable alternatives and advocate for policy changes.

COFERSA, the Convergence of Rural Women for Food Sovereignty in Mali and one of BEDE’s partners in West Africa, is exemplary in how it engages women in the food sovereignty movement. The convergence, which was created six years ago, is made up of 36 rural women’s cooperatives that comprise 3,900 members throughout Mali and works to promote food sovereignty by supporting women farmers in advocacy and agro-ecological production. Its approach to food sovereignty is based on conserving and having full control over local seeds.

The difficulties to conserve cereals grown with chemical fertilizers convinced COFERSA to turn towards agro-ecology. The presence of COFERSA all over Mali facilitates the collection of seeds and has enabled the group to hold a great variety of seeds. The collected seeds are being multiplied in the fields of the union. Once harvested, the seeds are kept in barrels, gourds and granaries according to ancestral techniques of preservation. As soon as there are sufficient seeds, COFERSA will make them available to Malian producers to provide an alternative to the imported seeds producers are dependent on. 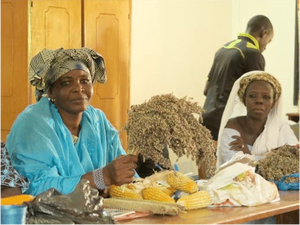 Another important part of COFERSA’s work besides collecting and multiplying seeds is to spread its knowledge and to strengthen the capacity of rural women in agricultural and food production. The convergence owns 20 hectares of land where it regularly trains women on the techniques of agro-ecology. The production and dissemination of local seeds, as well as making known their inherent value, is an integral part of these trainings, which also provide basic knowledge on the rights of farmers and create forums for exchange. Together with BEDE, the convergence is raising awareness on the benefits of local consumption with regards to healthier nutrition. The idea for this campaign came out of a COFERSA workshop in 2011, which focused on the economic, health and the environmental impacts of consuming agri-food products vs. local products.

COFERSA’s workshops are valuable spaces for training, exchanging and strategizing. Last year the convergence brought together 40 people for an “agro-ecological seed production” training of 5 days. At this meeting COFERSA was able to develop a strategy, an action plan and follow-up for the production of local seeds within the convergence and for its members. The main points discussed at the trainings are research, production, conservation, dissemination, capacity-building and sharing, information and advocacy. The outcomes of the trainings are not only very promising for COFERSA but in general for peasant seeds in Mali and the agro-ecology movement.

As much as it is clear that the struggle for food sovereignty cannot be won without gaining control over seeds, nor can it be won without the crucial involvement of women movements.

About the author:
Anne Berson is the Program Coordinator in West Africa and an Agro-environmentalist at BEDE (Biodiversity: Exchange and dissemination of Experiences)