Event: State of the negotiations on a UN Treaty on Business and Human Rights – CIDSE
Skip to content 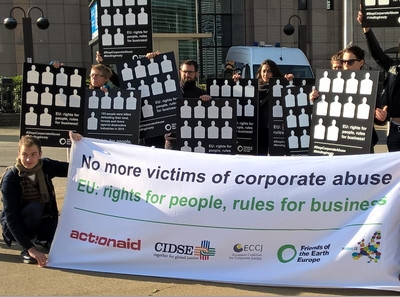 “Is the window of opportunity still open?”
Policy lunch organised by the Development and Peace Foundation (sef:) with CIDSE. Brussels, 20 November 2017, 12:00-13:45.
Venue: Representation of the State of North Rhine-Westphalia to the EU

From 23 to 27 October 2017, a working group commissioned by the United Nations Human Rights Council met in Geneva to negotiate possible elements of a legally-binding treaty on business and human rights. For the first time, there seems to be a window of opportunity to go beyond voluntary means as established by the UN Guiding Principles on Business and Human Rights. It might be possible to increase the accountability of businesses for the protection of human rights. In addition, a binding UN Treaty could also provide the prospect of enhancing the access to effective remedy for victims of business-related human rights violations.

The scope of a potential treaty is still to be defined. In the run-up to this third session of the intergovernmental working group, diverging views on the need and extend of such a treaty were discussed. Up to now, the “soft-law” approach seems to have limited success. Weak transparency in supply chains of internationally operating companies and complaints about human rights violations and damages to the environment by these companies continue. On the other hand, concerns have been raised that a UN Treaty may undermine the voluntary commitments made in the past years.

Initially, the European Union had also been one of the critics of the negotiations, while the European Parliament has been a supporter of negotiating a binding treaty. At the same time, a number of European countries (France, Great Britain and the Netherlands) have already progressed on adopting binding laws for parts of business action (requiring “vigilance plans” and banning child labour and slavery for example).

Following the October negotiations, we would like to shed a light on the content of the discussions:

Input and Roundtable discussion by:

Followed by discussion with the audience

Please register online to this event before 15 November 2017