Trudeau government brings an ambitious feminist vision to Canada’s foreign policy, but no budget to bring it to light – CIDSE
Skip to content

Since Canada’s Prime Minister Justin Trudeau announced to the world that “Canada is back!” after his election in 2015, the world has been watching our self-identified feminist Prime Minister to see if he is truly bringing our country back on to the global stage. So far, he has named a cabinet with gender parity and then launched a “Feminist International Assistance Policy” (FIAP). This year, Canada will continue to be in the spotlight as we host the G7, while continuing to campaign for a seat on the UN Security Council in 2021.

At Development and Peace, we watched as the Trudeau cabinet unveiled their entire foreign policy over the period of a week last June. Since our foundation 50 years ago, women have been essential actors for change in our programmes, both in the Global South as well as in our movement here in Canada. Even though women face major challenges including discrimination, violence and injustice, they are at the heart of change when it comes to the issues we work on, including ecological justice, peace and reconciliation, and democracy and political participation. At the time of the unveiling of Canada’s new foreign policy, we were hard at work at our Montreal offices putting the finishing touches on our campaign on the transformative role of women in peacebuilding to be launched across Canada in September. Entitled “May Peace Be With Her”, it put women front and centre in our 2017 campaigns.

We were eager to know whether our government would increase funding for international development, and especially for peace-building.

The week began with a powerful speech by Foreign Affairs Minister Chrystia Freeland about how Canada was committed to building a more peaceful, prosperous, and sustainable world. In her speech, Minister Freeland announced the government’s massive new investment in the military, while making no mention of an increase in international development assistance. As the week wore on, Minister of Defense Harjit Sajjan presented the Canadian Defense Policy, which promised to increase the military budget by 70% over ten years. This commitment comes in a context where Canada is finalizing the sale of $15-billion dollars’ worth of light armoured vehicles to Saudi Arabia.

The following day, International Development Minister Marie-Claude Bibeau unveiled her “Feminist International Assistance Policy”. It follows the choice that many Canadian organizations had already made to put women front and centre in their development work.

With this new policy, Canada joins some Northern European countries and Australia who have feminist and gender-focussed international development policies, but this policy marks the first time that a country focuses its development and humanitarian funding almost entirely on gender equality.
The policy focusses on core gender equality work, including preventing and responding to sexual and gender-based violence and supporting local women’s rights organizations and movements, with special funding dedicated to front-line grassroots women’s organizations. A key area of focus of the feminist policy is inclusive peace and security, which includes supporting women’s rights organizations’ engagement in peace processes; advancing women’s rights in post-conflict state building; and addressing sexual violence in conflict zones. The policy does not forget about the roles that boys and men can play in challenging gender stereotypes and changing gender roles and relations.

The government has set ambitious funding targets for this transition to a focus on gender equality and women’s empowerment. Within five years, 95 percent of Canada’s bilateral international development assistance budget will either focus on gender equality, or will include gender equality work. Given the stagnation of Canada’s current international development assistance budget of 5.3 billion dollars, this quick transition has led many to ask how long-term partners will be affected by the sudden decrease in funding in traditional aid sectors. At 0.26% of Canadian GNI (Gross National Income), the Canadian international development assistance budget is still far below the UN target, set at 0.7% of the GNI. We were dismayed to see that the Trudeau government had decided to increase the defense budget by 70%, on the other hand, more specifically to just under $14 billion dollars CDN over the next 10 years. If the government believes women’s empowerment is a catalyst for peace, why has it chosen to invest massively in defense instead?

Development and Peace’s campaign highlighted the promise offered by Security Council Resolution 1325, adopted in 2000, which acknowledges women’s crucial contribution to building peace, and highlights the importance of their meaningful, full, and equal participation at all levels of peace processes. However, 17 years later, around the world, in both the Global North and South, women’s expertise is still underestimated, women’s organizations are consistently underfunded, and they remain, by and large, excluded from formal peace processes. Given the increasing number of violent conflicts and their dramatic repercussions on civilians, and especially women, we must find new solutions to promoting peace, and an investment in women will certainly contribute to a more peaceful world.

In November, Canada launched its National Action Plan on Women, Peace, and Security, which is part of the implementation of Resolution 1325. The result of comprehensive civil society consultation, the Action Plan offers a framework for a “whole-of-government” approach, which has become key term for the Trudeau government as they try to promote cohesive policy-making. However, there has still been no increase in funding for the implementation of its feminist international assistance policy.

Canada’s new foreign policy clearly shows that Canada is choosing to put military might before international development. As Pope Paul VI stated in Populorum progressio 50 years ago, ‘Development is the new name of peace’. By spending almost four dollars on defense for every dollar on development, Canada is not taking a progressive approach to building a more peaceful world. And this ratio is set to increase on the side of military spending according to the government’s plans.

If Canada wants to show global leadership with its feminist approach to development, more development funding is obviously needed. As well, Canada needs to show that its approach to trade and to defense does not undo the good work done by Canada on development. As Development and Peace launches its upcoming 2018 Lenten campaign on peace, we will continue to call on our government to show leadership and ensure that they are truly building a more peaceful world based on equality between women and men.

About the author:
Based in Montreal, Elana Wright has been working on advocacy and campaigns at Development and Peace- Caritas Canada since 2013. Her work focusses on mining justice, peace and reconciliation, and women’s rights. Before joining the team at Development and Peace, she specialized in youth engagement and human rights. 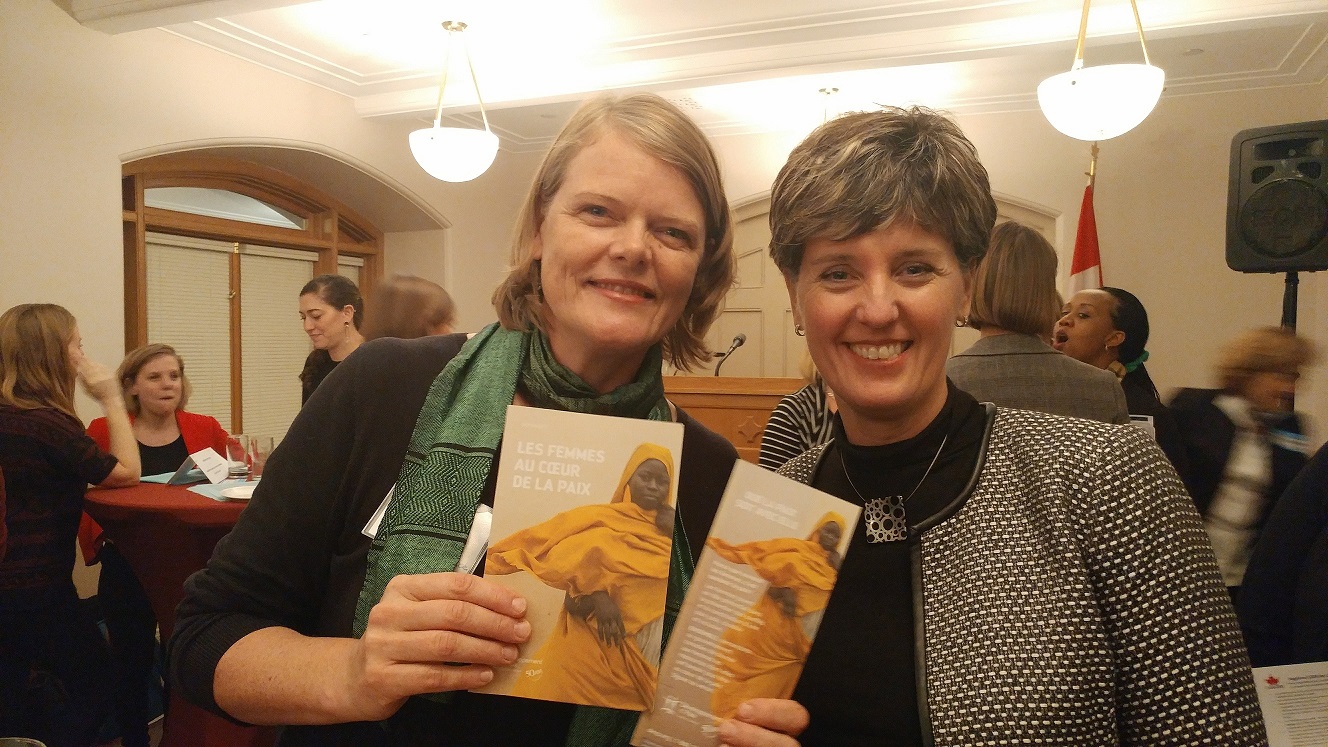