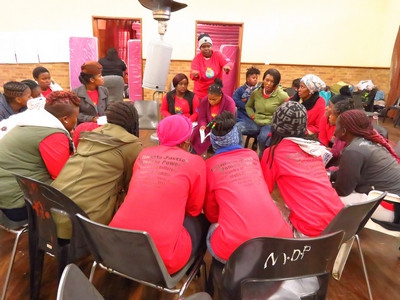 The town of Ogies is nestled in the heart of Mpumalanga Province, South Africa’s coal capital. The drive from Johannesburg passed coal-fired power plants and mines takes an hour and a half with the faint twinge of smoke up your nostrils. Driving into Ogies, gusts of murky air hit you head-on. You are now engulfed by the dust from the 15 coal mines surrounding the town. You also spot the menacing construction site of the mega coal-fired power plant Kusile belonging to the national energy utility Eskom. If (or when) completed, it will transmit 4800 MW of power, making it one of the top five biggest plants in the world and the biggest in South Africa apart from its counterpart Medupi. With that instant of climate-induced depression, comes clarity on why Ogies was chosen to host the first ever energy and climate justice camp for women; it’s a perfect setting to ground the lived reality of women in dirty modern South Africa.

The Greater Phola/Ogies Climate Camp comes under the banner of the Women Building Power Campaign, which is a grassroots women-led and women-driven campaign supported by WoMin. At the core of the campaign are a set of principles agreed upon at the December 2015 Niger Delta meeting. These principles include a commitment to grassroots women’s organising and movement building grounded in solidarity and popular education. These principles drive the building of an African ecofeminist women’s movement for democratised renewable energy and climate justice.

“We are building a movement from the grassroots, nobody knows our pain. Our harmony, our peace and our dignity have been disturbed. Before mining companies, we did not worry about buying water. We have been made poor by the elite, and we are staging this walk [and doing this campaign] to build awareness and show the strength of women who are challenging mining and this kind of dirty, unsafe and unsustainable development.” Women of Somkhele and Fuleni, northern KwaZulu-Natal, South Africa 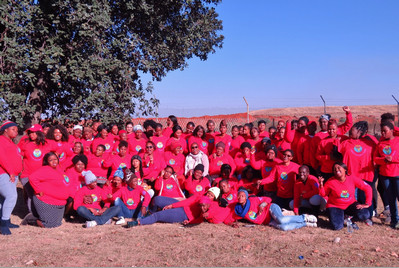 For the 80 women who bussed and taxied in for the event from various coal bearing parts of the country, including some of the old and new coal hotspots, the scene felt all too familiar. Basically, same mess, different town. The camp was held from 11-15 June, which signals the beginning of the deep winter chill that hits Mpumalanga particularly hard, and makes outdoor camping not viable. Instead, the Greater Phola/Ogies Women’s Forum who have been tirelessly working to build the resistance against coal expansion in the area, and who hosted the camp with the support of WoMin’s Women Building Power Campaign, negotiated for months for a church to be rented out to accommodate everyone and host the event. There were thin mattresses provided, blankets from homes decked out across the wooden floor of the church at night, and limited access to water from the municipality (water had to be tanked in) for bathing, drinking, and flushing the toilets during the day. The grim joke of the event was that this, more than just any ‘learning and organising’ camp, was in fact much like a climate refugee camp.

The sisters woke up each day in shifts from 4 a.m., to first fill up buckets of water, then light a fire to heat the water, and then carefully decide which parts of their bodies most needed cleaning given the very limited amount of water available to each of them. By 9 a.m. they had already cleared out the church, laid out the chairs by the space heaters (with only two or three in the chilled air of the cavernous space), had queued up in order and eaten a simple breakfast, and finally taken a seat ready for the day’s programme. The women seemed to endure the hardships of the climate refugee camp – unknown to the urban middle and upper classes in South Africa – with remarkable grace. Actually, it became obvious that the conditions were not abnormal for them, echoing their daily lives in the townships and farms across South Africa. One of the campers from Phola (the township in Ogies) sighed that access to water was a daily battle:

“We also lack water. The reason why we lack water is that we have so many mines. They are not putting back to the community because the mines are using our water and they are using a lot more water than the community. Maybe in the morning, as early as 4 a.m. we have some water. But by 6 a.m. the water is finished. Sometimes the whole week happens that we don’t have water. It’s difficult because even the municipality doesn’t help to bring the water tanks. Even if the ward councilors who work with the community are calling the municipality to bring the trucks for us, they don’t come. They just don’t care.”

The others could all too easily relate. From the access to basic services such as water and energy, to the encroachment of mines and plants on their lands or displacements arising from these, and to the degradation of their environment and the pollution filling their bodies, life is a struggle. And struggle is life. The sharing of experiences through stories of resistance against destructive projects was a pivotal part of the camp, revealing not just how women are impacted but also how to build together a movement to resist and transform their communities. A sister from the emerging new coal capital of Lephalale, to the north of the country, passionately explained that:

“This camp made it possible for us women to be open and not be silent. We have to talk to each other. Whatever is hurting inside, share it with someone else. I found something here being with other women like this. We have to solve it together.”

The programme also packed in talks on national energy and climate politics as a way for the sisters to locate their struggles, and to navigate through the technical language of the ‘experts’ so that they could give voice to their issues in government and corporate-led spaces. The government is currently developing a national climate change bill and electricity plan and is pursuing engagement on the mining charter. But these policies and pieces of legislation are being hotly contested by civil society groups for the lack of consultation with, and information on, those people, particularly women, who are affected by climate change, mining and lack of electricity. 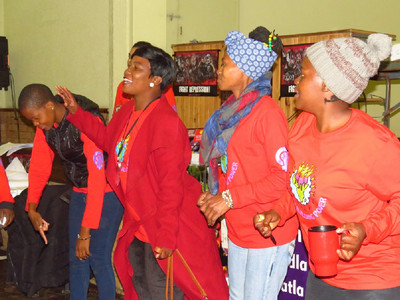 One woman poignantly spoke about the current situation with access to energy:

“Finding energy is like trying to find gold. We walk long distances to collect fire wood; in our areas there is no forest anymore. Where we used to collect wood the places are now being shut down by mining. We have to buy wood, paraffin including coal to make fire which is not sustainable but just to satisfy our basic needs which is for lighting and cooking.”

A space for comfort, healing and solidarity

For many women there is no escape from energy poverty. Even though South Africa possesses large electrification rates, there are still many households that are not connected to the gird. On top of that, millions are connected to the grid but can’t afford electricity, which is the leading factor for women to use cheaper dirty fuel.

To add to these woes, women have to face a double burden of violence in trying to access resources for themselves and their families. South Africa is one of the most violent countries in the world, and violence against women is particularly alarming. This violence manifests itself in many ways, from the military and security apparatus of the corporations that are developing these projects, to the everyday violence and abuse as they go in search of wood and coal to meet domestic energy needs. The stories were painful to hear, but it was essential for women to have a space to cry, comfort each other, and start to heal.

As the last day approached and the feelings brought up by stories of violence and abuse simmered down, women started to look to the future. There was a spirited training on wonderbags – an energy-efficient way to cook – and a show-and-tell of clean renewable energy that can work at the local level off-grid. Driving away it was clear the camp was the start of a process to turn momentum into a tidal wave of a national movement that can push the leaders to act against climate change, energy inequality, and the violence perpetrated against women. The camp transformed the campaign, building an open, safe space for women to organise and build power against oppression that is destroying life, humanity, and ecology.

By the National Steering Committee of the South Africa Women Building Power Campaign; and Caroline Ntaopane & Trusha Reddy of WoMin