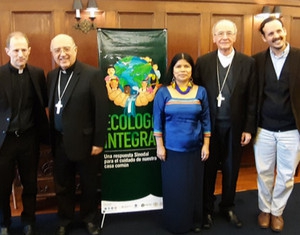 Two decades ago as a young university student, I had the opportunity to study in the Amazon region in and around Ecuador’s Yasuní National Park. The experience of seeing such incredible biodiversity juxtaposed with the environmental and social consequences of oil exploitation changed my life.
The Maryknoll Office for Global Concerns partners with the Pan-Amazon Ecclesial Network (REPAM) to protect this region. REPAM is a network and partnership between communities in the Amazon and the Catholic Church. Together, they strive to protect indigenous territories, cultures, and livelihoods from powerful forces such as large-scale development projects.

Due in great part to their combined efforts, the Vatican is hosting a Synod on the Amazon in October to respond to the cry of the earth and the cry of the poor in the region and in other critical biomes around the world.

To begin the dialogue, REPAM convened an international conference on integral ecology at Georgetown University in Washington, D.C. from March 19-21. The conference explored the environmental, social and political challenges facing critical biomes and how we can act together to protect our common home. The conference ended with proposals for regional collaboration that incorporate the spirit of Laudato Si’. 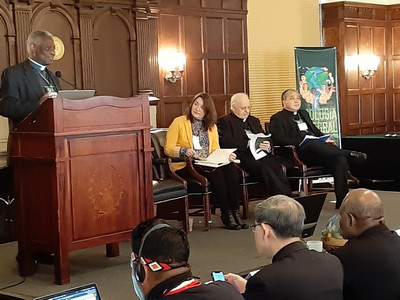 The synod couldn’t be more urgent. Brazil is the most fatal country for defenders of human rights and the environment, who are often assassinated for resisting large-scale extractive industries or agriculture projects. Almost 90% of defenders murdered in Brazil in 2017 died trying to protect the Amazon.

Not only are these projects associated with human rights violations, but they also can destroy livelihoods and ecosystems. In January of this year, a mine dam broke near the town of Brumadinho, releasing an enormous flood of toxic waste from mining that devastated the environment and human lives. Three hundred people died in this disaster.

This was the second dam to burst in four years. Both mines, located in the state of Minas Gerais, are co-owned by the Brazilian mining company, Vale. In the 2015 incident in Mariana, the toxic mining tailings flowed into the Doce River basin contaminating 600 kilometers, killing species that coexist with the river and a sacred place for indigenous communities. It was named the worst environmental disaster on record at that time.

See these heartbreaking images and powerful photo essays by CIDSE and the Washington Post on the Mariana and Brumadinho disasters respectively. The Bolsonaro Administration has demonstrated that it will go even further to open new lands to extraction and undermine human rights to do so.

Following the Georgetown conference, the Maryknoll Office for Global Concerns, along with other Catholic partners in Washington, D.C., arranged a briefing for REPAM in the U.S. House of Representatives to highlight these concerns. Panelists included Cardinal Claudio Hummes (President of REPAM), Mario Nicacio (Vice Coordinator of the Indigenous Organizations of the Brazilian Amazon (COIAB) and Wapichana indigenous leader, Danilo Chammas (lawyer at Justiça nos Trilhos), and Father Dario Bossi (Coordinator of Iglesias y Minería). They spoke about threats against indigenous communities and church leaders such as Brazilian priest, Father José Amaro Lopes de Sousa. He has been jailed and received death threats for his advocacy to protect land rights and the environment. (See below in attachment the REPAM and Iglesias y Minería presentation) 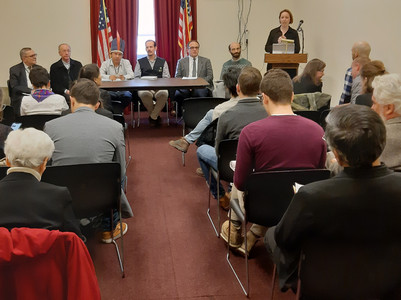 Members of Congress are paying attention and have sent letters to the U.S. State Department asking them to monitor and speak out for human rights in Brazil.

This Congressional briefing is one small example of how the Church can breathe life into the words of Laudato Si’ and act to protect our common home and its inhabitants. The Synod is an opportunity for the Church to do even more.

Chloe Noël is the Faith Economy Ecology Program Director at the Maryknoll Office for Global Concerns in Washington, D.C. She advocates for economic and ecological justice, and human rights. She has lived and traveled in Latin America and covers issues related to the region.

The Maryknoll Office for Global Concerns is CIDSE’s US member.