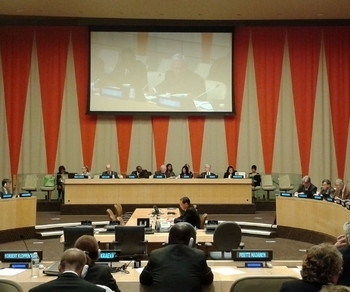 Compared to the last time I was in New York for the UN General Assembly’s Special event on MDGs and the Post-2015 framework, there are not half as many barricades and there are much less people in the room. But the sense of excitement that pervades  the “Post-2015” and “Sustainable Development Goasl” formulation process still remains. This sense was also palpable as Intergovernmental Committee of Experts on Sustainable Development Financing (ICESDF) met for their second time, 2-6 December 2013. The ICESDF consists of 30 experts nominated by the various geographical groupings in the UN. The Committee was created as a result of an agreement reached at the Rio+20 Conference on Sustainable Development in 2012. Their mandate is to lay out the options for sustainable development financing for the future.

The meeting in December is their first “substantive” meeting. Their first meeting in August went into agreeing on the way they would organise their work.  The otherwise closed group opened up a space in their agenda for an “interactive” session with UN member states and Civil Society. We welcome this space. But it is still far from the desired level of interaction and exchange that this agenda deserves.

At the interactive session panelist Aldo Caliari, from CIDSE’s US member Center of Concern expressed the hope that the Committee would observe the same modalities to engage with civil society that were observed for the Monterrey Conference on Financing for Development in 2002.  This Conference and its preparatory and follow-up process has been noted for its strong and effective mechanism to engage a range of stakeholders- from civil society, the private sector and multilateral institutions.  Given the great overlap between the agenda of the ICESDF and the Financing for Development (FfD) agenda. Civil society has called for the Committee to respect the best practice established by FfD. At the interactive session, a similar sentiment was echoed by the Tunisian Ambassador who requested that sessions be webcast to allow greater transparency of the Committee. Similarly, the Cuban member of the Committee also observed the value of following Monterrey modalities. Despite all these calls, the ICESDF’s decision to maintain closed meetings with only a limited slot for interaction with other member states and stakeholders is indeed a disappointment!

Aldo Caliari highlighted the recommendations of the CSO’s Trade-Finance cluster in his intervention. He particularly emphasised the importance of financial regulation.  His views were backed by many of us from civil society given the floor after the panel discussion. I listed key issues to be tackled to enable countries to raise revenues at the national level most effectively- ending tax competition, preventing large Transnational companies from avoiding paying their fair share of taxes and  eradicating tax havens and secrecy jurisdictions. Our colleague from the Women’s “Major group”, Nerea Craviotto from AWID, reflected on ongoing trade negotiations in Bali, emphasising the need for the WTO to respect the right to food and the policy space of developing countries to take measures to uphold the right to food of their populations.