One prophetic step on a long way – CIDSE
Skip to content 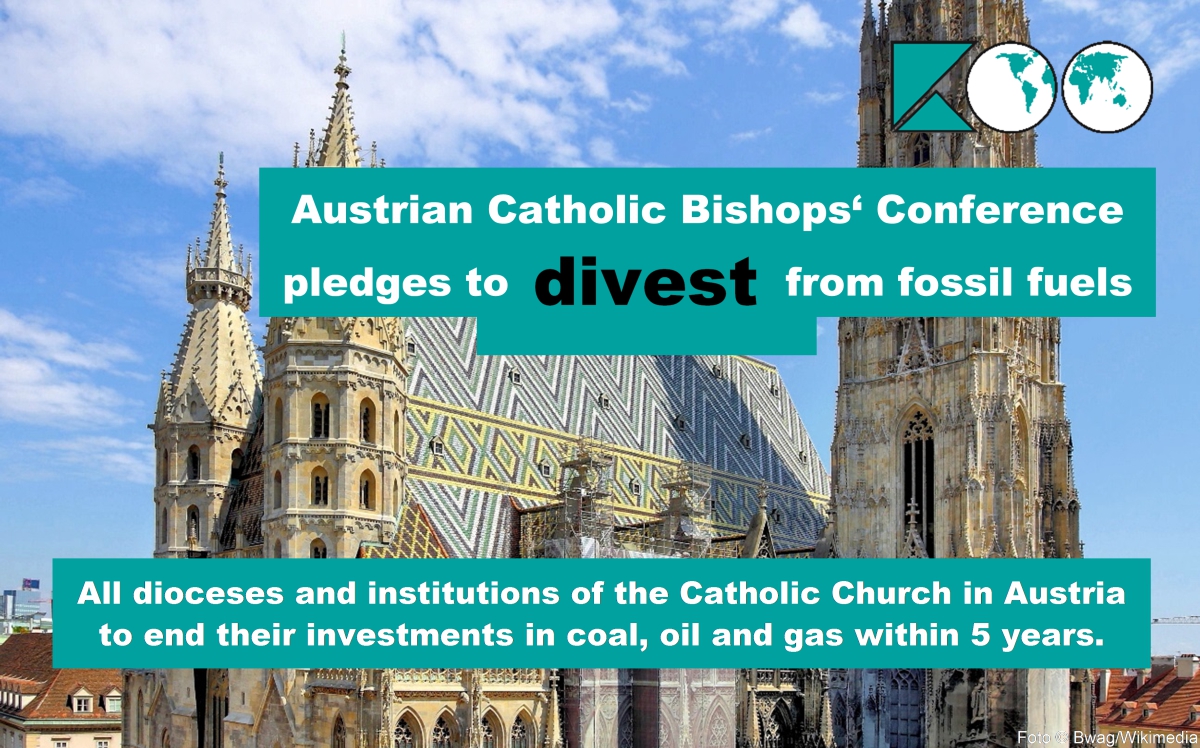 Cardinal Christoph Schönborn, Chairperson of the Austrian Bishops´ Conference, announced on 22 March 2019, the decision of Austrian bishops to divest within five years from all businesses that extract or produce fossil fuels (coal, oil, and gas). This decision includes all financial investments of the Bishops´ Conference, all Austrian dioceses and all institutions within their sphere. Austria is the third Episcopal Conference after Belgium and Ireland announcing its divestment decision publicly.

A number of steps before had made this decision possible. First of all, following Laudato Si’, the bishops decided in 2015, to elaborate diocesan climate strategies. Secondly, the bishops´ conference has decided ethical investment guidelines “Financial Investments as Cooperation” (FINANKO) in autumn 2017 which were already strict by banning coal and fracking. These guidelines will now be adjusted by excluding also oil and gas.

Even for these steps a lot of in-betweens were necessary: e.g. the diocesan environmental officers did not stop raising the awareness of ecclesiastical decision-makers for our common home. Some financial experts worked hard in convincing their colleagues in the dioceses about the economic dimension of our responsibility. And finally, we as KOO brought the international dimension into the discussion. The decision is a result of real interdisciplinary teamwork and co-operation and a good experience to tackle the next challenges.

Today 1032 institutions globally have signed divestment pledges – 28 percent are faith-based organizations. So, by signing the divestment commitment of the Global Catholic Climate Movement (GCCM) the Austrian Bishops´ Conference joins the global divestment movement of over a thousand institutions. This is a prophetic step that consequently follows the undeniable truth, that burning all known fossil fuel reserves will lead us to unthinkable catastrophes.

We are able to observe the consequences of the massive demand for resources that trigger ecological and social crises every day in the living conditions of people in our partner countries – not just in the global south. It is unacceptable that people on other continents or the whole of creation pay the price for our excessive lifestyle. We, as Christians, and our institutions have the responsibility to care for creation and work towards global justice. We are among this part of the world’s population which produces the biggest share of greenhouse gas emissions and therefore naturally we need to fight its main cause – the use of fossil fuels.

This important step shows the Austrian bishops’ coherent effort to meet the demands of the Paris Climate Accord. The announced realignment of financial investments follows the climate action in the areas of energy and procurement already decided in 2015. All these steps empower us and the environmental delegates of the Austrian dioceses, who are participating in the implementation of climate action.

Finally, I would like to highlight the words of Bishop Werner Freistetter, responsible for International Church Affairs, who welcomes the announcement of the Bishops´ Conference in this way: “From the perspective of integral ecology, the logic of profit can no longer be the sole benchmark for economic activities, while ignoring moral obligations. By adopting ethical investment guidelines in 2017 the Catholic Church in Austria already took an important step towards aligning financial investments of Catholic institutions with the care for our common home. Our recent decision consequently follows this path. Financial investments of Catholic Institutions won’t fuel the climate crisis anymore but instead will contribute to preserving creation. We call on other institutions to join the divestment movement with their pledges in order to maintain our common home for current and future generations.”

Anja Appel is Political Scientist and since one year the Director of the Coordination Office of the Austrian Bishops´ Conference (KOO) which is a department of the Austrian Bishops´ Conference, responsible for development and missionary work. (www.koo.at) KOO is a member of CIDSE – International Cooperation for Development and Solidarity and of GCCM. Before she used to work as Secretary General of the Catholic Women´s Movement. You find her on Twitter @anjaappel_koo