Meeting at the Intersection, discussing with Jennifer Henry on the World Social Forum – CIDSE
Skip to content 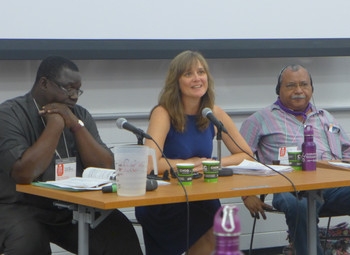 Jennifer Henry is Executive Director of KAIROS: Canadian Ecumenical Justice Initiatives. She participated as a panelist in the workshop “Laudato Si‘, a Call for Change” co-organized by CIDSE, Development and Peace and Franciscans International. On that occasion she reflected on the place of spirituality and justice in debates at the World Social Forum and on Laudato Si’ in the Canadian context.

For me the World Social Forum (WSF) has always been a meeting at the intersection. People come together across different struggles, issues, and contexts not to impose unity, but to seek synergies, convergences and understanding. The WSF aspires to be an exchange in and about the global commons, where values may be shared but the diversity of particular experiences and understandings are welcomed for what they add to deepened commitment and action.

KAIROS, as a Canadian ecumenical social justice organization, strives to live at the intersections − between denominations, between ecological justice and human rights, between churches and movements, between the local and the global. And so at the World Social Forum we felt at home, not simply because this Forum was very literally in our home country, but because we could join our way of working to others. Our contributions, workshops, panels and symposia, were characterized by the sensibility of “both/and”—resource extraction and gender equality, Indigenous and diaspora communities, climate change and colonization, extractivism in the North and South.

We were also delighted to participate in an event hosted by CIDSE, our member organization the Canadian Catholic Organization for Development and Peace and Franciscans International. It was an opportunity to reflect at another intersection, that of the secular and sacred. In a panel on Laudato Si’, participants welcomed the Papal commitment to “integral ecology” as another dimension of intersection—a framework where there is simultaneous consideration of social, economic, and ecological impacts. We affirmed that not separation or dualism, but the interconnectedness of all life is the web that should undergird analysis and strategy, vision and relationship, always striving towards inclusive transformation. Panelists brought a hope for an ever more expansive view, including strengthening gender equality as a critical component of the “ecological conversion” Laudato Si seeks.

Within a dynamic global panel, our particular Canadian contribution on the encyclical came from our deep reflection on colonization, an understanding catalyzed by the Truth and Reconciliation Commission of Canada (TRC). This process, which was both initiated and informed by the courageous leadership of survivors, revealed the truth of a 150 year process of cultural genocide related to Indian residential schools for First Nations, Inuit and Métis children. In Canada, we have come to understand that residential schools were just one aspect of a devastating legacy of colonization with its goal of dispossessing Indigenous peoples of their lands and eradicating Indigenous cultures, languages, spiritualities, and nationhoods. At the very least, here in Canada, it is vital to see how reconciliation with the land, expressed in the Papal encyclical as “reconciliation with creation,” is inextricably linked to reconciliation with the original people of the land.

Around the globe, we see that colonization and the exploitation of our earth cannot be separated. In what is now Canada, settler quests for land and security displaced Indigenous peoples and began a pattern of taking beyond the earth’s limits, such as in the harvesting of furs, buffalo, forests, and cod. Our current fossil fuel crisis is increasingly about unconventional extraction that risks the health and livelihoods of Indigenous communities. Globally, Canadian mining interests are implicated in ecological harm and, too often, in the harm of Indigenous peoples. Aggressive extractivism is neo-colonialism.

In the encyclical, Pope Francis rejects domination theology for its role in the exploitation of the earth. It needs also to be rejected for its contribution to the subjugation of Indigenous peoples in the process of colonization. It is important to recognize that some of the core values that the encyclical now affirms long lived in Indigenous spiritualities and practices. And, because they were seen as antagonistic to Christianity, were aggressively suppressed. For example, in the Canadian context, the government banned Indigenous spiritual ceremonies, like the sun dance, while Indigenous children in residential schools were taught by churches that these spiritual practices were evil. We can recognize now how many diverse Indigenous perspectives on creation are prophetic in our current ecological crisis. Cultural genocide and ecocide were also deeply entangled.

Laudato Si’ powerfully reveals a humanity at a crossroads. Instead of continuing to walk the economic pathways that are predatory upon the earth and have resulted in exclusion and deep inequality, we are challenged to walk the path of “integral ecology” that serves the common good of people and the earth. We are invited to affirm core values of the interconnectedness of all life, intergenerational solidarity, and the inherent value of all living things, as consistent with faithfulness to Christ. In the Canadian context at least, our response requires humility, recognizing the leadership of Indigenous communities who have long held these values close and endeavoured to walk the earth, in balance with all of creation. It also requires repentance, an explicit recognition of how Euro-Christian approaches got entangled with colonization to suppress Indigenous ways, including ways consistent with ecological integrity. Laudato Si’ can be heard as a call into deep solidarity with those whose lives and struggles, past or present, have always shown strong connection with the earth.

Conversations inclusive of faith in the WSF, including the important process of the World Forum on Theology and Liberation, underscore one of the most vital intersections of all, that of spirituality and justice. Whatever our commitments—ecological justice, human rights, economic equality—or the persistent interweaving of one into the other, expressions of justice are expressions of faithfulness. Acts of solidarity with the earth and all God’s people are ultimately a response of deepest solidarity to the One whose dream is ever abundant life and right relation. People of faith belong in the movements for transformation and in vital conversations, such as those of the World Social Forum, that strengthen our resolve, deepen our commitment, and forge new understandings towards the transformation that is our common hope.