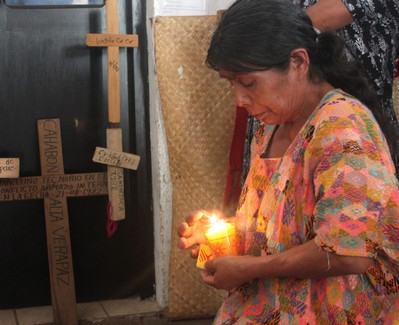 • 2016 registered 233 human rights defenders assaults and 14 homicides, the majority of those remained unpunished
• The EP reports threats and intimidation campaigns towards court officials
• The EP urges both Guatemalan authorities to comply with their human rights obligations and the Congress to ratify the reform justice proposal.

Brussels, 16 February 2017. The European Parliament today, during his plenary session in Strasbourg, has approved an urgent resolution on the situation of human rights defenders in Guatemala. By this initiative, eurodeputies both express their concerns and acknowledge the work carried out by human rights defenders. For this reason, they urge the Guatemalan government to adopt measures aimed at protecting HRDs from assaults and dangers they are confronting regularly.

Figures are alarming. The EP recalls that in between January and November 2016, 223 assaults were registered against Human Rights Defenders s as well as 14 killings and 7 attempted murders. Since the beginning of the year, 2 Human Rights Defenders were killed in Guatemala. The majority of these crimes were the final act of a long and repetitive cycle of violence.

The EP also underlines the hostile environment in which justice officials have to work. They face harassment, criminalization, coercion, discredit and intimidation campaigns, which undermine the independence of the judiciary system in the country.

The resolution also supports the new justice reform initiative, which has been presented recently in the Guatemalan Congress. It aims at undertaking legal reforms to strengthen the Rule of Law in the country.

Majority support in the European Parliament

According to Beatriz Becerra, vice-chair of the Subcommittee on Human Rights of the European Parliament and member of the Group of the Alliance of Liberals and Democrats for Europe (ALDE), “human rights defenders are the most powerful asset in the achievement of a more independent justice, however, they are defamed, harassed and ultimately assassinated. For these reasons the Guatemalan government have to protect them with ambitious public policies”.

Last year, Hans-Olaf Henkel, member of the European Conservatives and Reformists Group (ECR) took part in a European Parliament mission to Guatemala. “Since my visit, I closely followed this serious situation and although I developed hopes with the new elected president, today I am deeply disillusioned and the situation of lawyers and Human Rights Defenders seems highly worrying”.

Marina Albiol, of the GUE/NGL group considers that “ showing concerns is not enough”, especially because “EU responsibility is evident”. “There is a link between the presence of multinational corporations and attacks of Human Rights Defenders who oppose and mobilise against hydroelectrical projects, as shown by the case of Pojom II or Renace, mining projects such as FeNix or the one represented by the French oil company Perenco”.

Finally, Ernest Urtasun, member of the Group of the Greens/European Free Alliance states that “it is not possible that representatives of the judiciary as well as the Director of the International commission against Impunity in Guatemala (CICIG), Iván Velázquez, are subjected to attacks without the government putting in place efficient protective measures. With the introduction of the Constitutional Justice Reform proposal, elaborated with the contribution of many national sectors and under discussion in the Congress now, we can see a light on the horizon although it is imperative that the proposal is fully endorsed”.

These organizations highlight in particular the parliamentary petition which invites the EU to take on a more proactive role in the promotion of the security of Human Rights Defenders, through the adoptions of effective measures and protection mechanisms in the framework of their political dialogue, cooperation and trade relations with Guatemala.

The organisations hope that this resolution can send a clear message to the Guatemalan authorities in order to act and protect human rights defenders, especially women, rural populations, trade unionists, persons discriminated because of their sexual orientation and indigenous communities; who all work towards a democratic society, and in defense of their land, the environment, Economic Social and Cultural rights, justice and the fight against impunity.

This joint press release is available in English, French and Spanish. See attachments below.