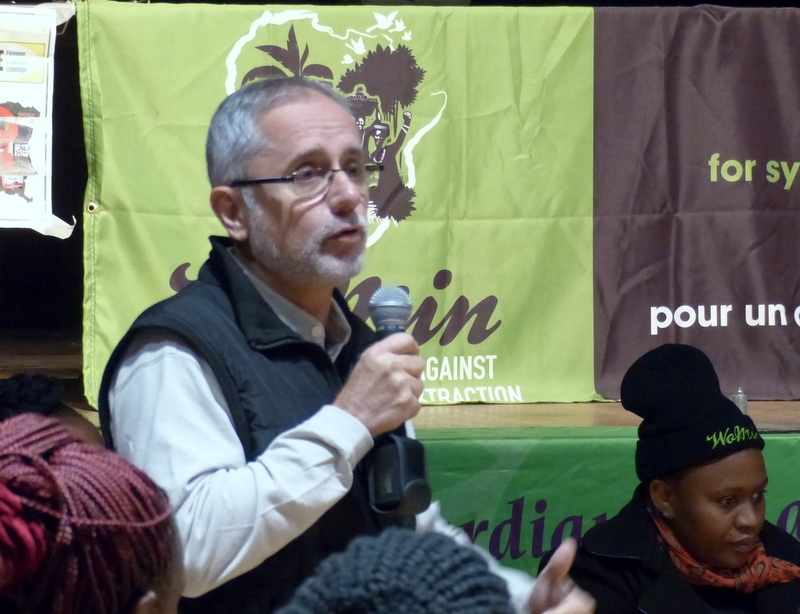 An interview with Father Rodrigo Peret from Franciscans International, member of Iglesias & Mineria network and of People’s Dialogue, about his recent arrest in Zimbabwe and the threats that environmental defenders face globally.

People around the world put their lives at risk to defend our planet or to stand up for human rights, but this attracts mainstream media’s attention only very sporadically when dramatic events take place and often when it is too late, like for the assassination of the environmental activist Berta Caceres in March 2016. However many more cases exist and its protagonists as well as the communities’ livelihoods they are fighting for deserve a wider visibility.

CIDSE discussed this topic with Father Rodrigo Peret from Brazil, member of Franciscans International and an environmental activist addressing the impacts of large-scale mining, one of the many environmental and human rights defenders that CIDSE and its members are working with.

Father Rodrigo was taking part in a visit to a mine site in Zimbabwe when he was arrested on November 10th, along with a group of 21 activists from Brazil, Britain, Kenya, South Africa, Swaziland, Uganda, and Zambia who were all in the country for an exchange visit about artisanal mining . The objective of the visit was to understand the role of artisanal mining and whether it could be an alternative to the mining model brought forward by transnational companies. Zimbabwe was chosen as a case to explore because over 1 million people are involved in artisanal mining. This model still faces many challenges in the country though: violence against artisanal miners is still common.

At the moment of the arrest the group was taking part in the 9th commemoration of the Marange massacre– remembering the “Operation Hakudzokwi”, a military repression on artisanal miners that reportedly left more than 200 people dead in November 2008. The commemoration’s goal was to remember those who died or suffered various forms of rights violations due to diamond mining in Marange and share stories of the survivors. Over 3000 people attended the event, mainly from the local surrounding communities.

“We were taken by immigration officers and later by the police from the place of the commemoration while we were attending the event with the locals” explained Father Rodrigo. The activists’ group was kept in custody for a day and was released after each paid a fine of US$100. They were accused of illegally trespassing a protected area and lawyers suggested to them to plead guilty. According to Father Rodrigo, the quick response from international partners hugely helped their quick release. The Brazilian embassy, the Holy See and various Bishops were indeed contacted quickly; international media attention also contributed to their case, as did CIDSE’s and members reactions of solidarity. The local community in Marange also reacted with anger to the actions by Immigration and Police and the people arrested received several calls and messages from community members expressing solidarity.

During their visit in Zimbabwe, the activists saw the results of the mining exploitation and recognized patterns that manifest similarly in different countries around big mining sites such as the destruction of livelihoods for the locals and the disintegration of community relations. This also happened in Marange where artisanal miners organized in cooperatives have gathered funds to get access to some basic infrastructures such as clean water and sewage systems. “It’s incredible how people live in tremendous need”- said Father Rodrigo. He also highlighted the close connection between the destruction of livelihoods and migrations. However, he said “While diamonds travel freely to Europe, people risks their life to cross the desert and then the Mediterranean sea”.

In this dire situation, people who are denouncing the impacts of big mining companies’ operations are often in danger, but  exposing the situation of the person who is threatened is extremely necessary: “If you hide, if you are afraid, if you don’t communicate, it’s impossible to build a network of support”said Father Rodrigo. He highlighted the importance to give visibility to people at risk, while also acknowledging that each case is particular and should be dealt with accordingly. National and international solidarity is also crucial to pressure governments; it gets much more complicated however when the defender is pressured by the government itself. A vibrant and strong civil society network is indeed a key factor that human rights defenders can count on when at risk, and the ability to connect and respond quickly when something happens is also of vital importance.

The conversation with Father Rodrigo also pointed out how the critical situation of human and environmental rights defenders is fostered by the gap in understanding that citizens have in respect to the concept of human rights itself and the way this is treated by mainstream media. “In some counties, people think human rights workers want to help those who are against the law, and perceive them as being against development. The work we are doing in Brazil about land reform for example makes some people mad. Some people even commented below articles about my arrest that I should be killed.” The global advancement of the right and of xenophobia is according to Father Rodrigo an obvious sign of the problems in perception of human rights and environmental integrity.

The interview with Father Rodrigo was recorded by CIDSE in November 2017. The resources below provide further information and analysis about the arrest of the group of activists in Zimbabwe on 10 November 2017 and were partly used in this article.

-Statement by the Centre for Natural Resource Governance (in attachment)